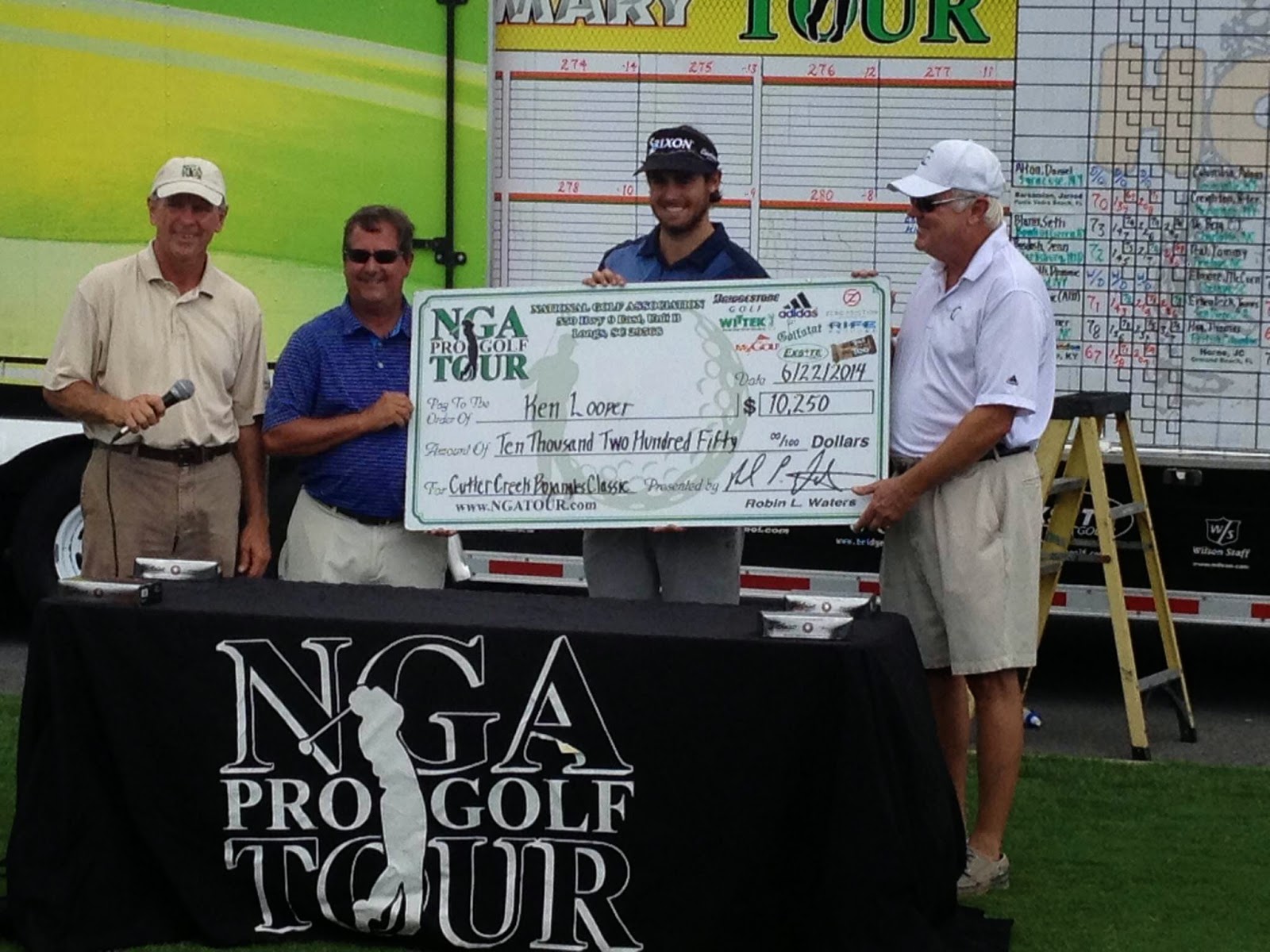 (Snow Hill, N.C.) – Former LSU star Ken Looper, out of Mandeville, La., may have closed out with the win but last week’s Cutter Creek Classic presented by Bojangles was a stark reminder of how sometimes golf can be a team sport and sometimes a tournament can have more than one winner.

When school teacher Danielle Ditoro said yes to her long-time boyfriend’s proposal little did she know she’d be committing to a summer job as a professional caddy. With his fiancé on the bag, the dynamic duo were able to get Looper to where he has been so close on several occasions so far this season, the winner’s circle.

The 2012 NGA Tour co-Rookie of the Year has had his share of successes on the NGA Tour this year with two runner-ups and a 3rd, 5th, and 6th place finish, losing one title in a playoff. When Ditoro decided to help her man out during her summer vacation, little did she know she’d also be helping him hold up a winner’s check by the end of the week. Looper, with his future wife by his side, shot 12 under par for the four day event and cruised to his third Pro Series title with a four shot win in one of the most impressive showings of the season.

Auburn’s Patton Kizzire finished at 10 under par and earned his second runner-up finish in a row. Tyler Light, making his debut on the NGA Tour Pro Series, shot an impressive 8 under par and finished alone in 3rd, not a bad debut for the rookie out of Malone University. A quartet of professionals finished at 7 under par and tied for 4th including one of Looper’s former LSU teammates Jarrod Barsamian, Drury University alum Thomas Hay, University of New Mexico alum and Mountain Lakes Classic Champion James Erkenbeck, and 2012 NGA Tour Player of the Year and past Cutter Creek Classic Champion Brandon Brown, who played collegiately at Eastern Kentucky University.

Brown’s T4 finish also made him a winner this week as well as Brown earned enough over the past two-tournament stretch to just edge out Looper by less than $1,000 to earn the NGA Tour’s event exemption into the Web.com Tour Utah Championship to be played July 10th through 13th. Ironically, in a true testament of history repeating itself, Brown’s last event exemption won on the NGA Tour, the 2013 Air Capital Classic, came at the conclusion of the 2013 Three Ridges Classic, the site of Looper’s last Pro Series win before Cutter Creek. Brown went on to qualify for the US Open last year opening the door for the Air Capital Classic exemption to be awarded to Looper since both events were taking place the same week. Could we see a repeat this season? Perhaps, but with the US Open  having already been played, Brown would have to qualify into the Web.com Tour’s Evansville or Canadian events and perform well enough to get into Utah based on earnings. Those that know Brown’s game would not be surprised at all to see it happen and most would probably say they’d be surprised if it didn’t.

The NGA Tour would like to thank Director of Golf Burt Williams, Head Superintendent Drew Ramsey, and the entire Cutter Creek Golf Club staff, membership, and volunteers for conducting such a championship event on one of the top courses in the state of North Carolina. The tour resumes play June 23rd at the Sound Golf Links at Albamarle Plantation in Hertford, N.C. for the Bigg’s Cadillac-Buick-GMC Classic. Spectators are welcome and, as always, admission is free to the public.