(Carlsbad, Calif.) – After posting the lowest-ever round in a U.S. Open at Pinehurst in Thursday’s opening round and then repeating his performance in Friday’s second round, TaylorMade-adidas Golf Tour Staff professional Martin Kaymer showed strength and character in running away from the world’s best players for a wire-to-wire win at the 114th U.S. Open Championship by 8 strokes. 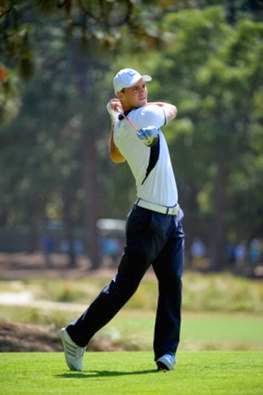 What You Need to Know:
* TaylorMade had 55 drivers (35% of field) in play at Pinehurst, staking claim to the #1 driver brand at the U.S. Open for the 14th consecutive year
* Kaymer’s win is his second in five weeks and second for adidas Golf footwear featuring revolutionary gripmore technology; In addition to Kaymer, 2013 U.S. Open Champion Justin Rose also wore adicross gripmore throughout the championship
* Kaymer has been a TaylorMade-adidas Golf Tour Staffer since 2010
* The win is Kaymer’s second victory of the season and third on the PGA TOUR
* Kaymer earns 600 FedExCup points and is projected to jump to fifth in the standings
* Becomes fourth player in last 20 years to win second major championship before turning 30

Kaymer first put the SLDR driver into play at the 2013 Open Championship and has kept it in the bag ever since. Currently the No. 1 played driver model on the PGA Tour, the SLDR is engineered with a remarkable low and forward center of gravity (CG) placement which results in dramatically reduced spin rates.

Known for rarely making equipment changes, Kaymer also added the new Tour Preferred MC irons to his bag at the WGC-Accenture Match Play Championship in February. Prior to the U.S. Open Championship, Kaymer had a Tour Preferred 3-iron de-lofted to a 2-iron for low trajectory shots and maximum roll on Pinehurst’s fast fairways. His win is yet another for the revolutionary speed pocket technology found in TaylorMade’s Tour Preferred irons.

An evolution in golf footwear, gripmore technology is an innovation in golf footwear cleat design that combines the performance benefits of spiked and spikeless footwear into one revolutionary technology. gripmore cleats are directly injected onto lightweight mesh matting inclusive of hundreds of microspikes for even more traction and stability. In addition to unbelievable grip, the adicross gripmore is among the most green-friendly shoe the company has ever created.