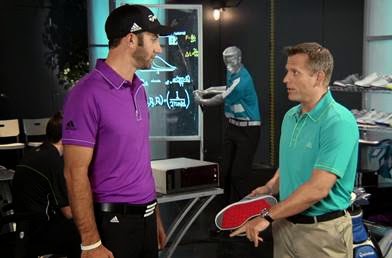 (Carlsbad, Calif.) – adidas Golf, an industry leader in innovation, technology and performance footwear and apparel, has announced the release of the fifth episode in the popular “adidas Golf Innovations” video series. In the penultimate episode, adidas Golf Tour staff professional Dustin Johnson engages in a series of physical demonstrations to visually illustrate how the increased number of contact points experienced by wearing footwear with gripmore® technology affects the traction throughout his swing.

To visually demonstrate how the distribution of weight while wearing footwear with gripmore technology compares favorably with the performance of a traditional cleated shoe, the eight-time PGA TOUR winner’s swing was evaluated using pressure plates, first while wearing his traditional golf footwear and then again in the adicross gripmore, one of two adidas Golf footwear models incorporating gripmore technology.

An evolution in golf footwear, gripmore technology is an innovation in golf footwear cleat design that combines the performance benefits of spiked and spikeless footwear into one revolutionary technology. gripmore cleats are directly injected onto lightweight mesh matting inclusive of hundreds of microspikes for even more traction and stability. In addition to unbelievable grip, both models are among the most green-friendly the company has ever created.

Brenkus, six-time Emmy Award winner, creator of "Sport Science" and New York Times best-selling author of "The Perfection Point", hosts the series that brings the science behind each innovation to life. Tested both with and without the new apparel and footwear for consistency and accuracy, the performance of our Tour athletes captured in the series is closely measured and compared by highly advanced data capturing tools and is presented graphically through a series of unique and engaging videos – one for each of the six key technologies to be unveiled by adidas Golf throughout 2014.

Click HERE to view the fifth of six videos on adidas Golf’s YouTube page. To learn more about the groundbreaking gripmore technology and to view both footwear models featuring the proprietary technology, visit adidasgolf.com, and follow @adidasGolf on Twitter for information on future release dates of the innovations video series.
Posted by Blogger at 9:17 AM