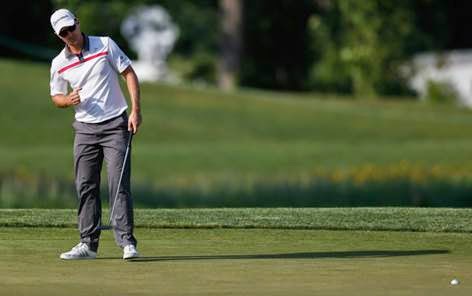 (Carlsbad, Calif.) – Known for emerging victorious on some of the most challenging layouts on the PGA TOUR, TaylorMade-adidas Golf and Ashworth Golf Tour staffer Justin Rose (@JustinRose99) came from behind to win the Quicken Loans National in a playoff at Congressional Country Club in Bethesda, Maryland; his sixth win on the PGA TOUR.

What You Need to Know:
· TaylorMade had 52 drivers in play at Congressional, once again staking claim to the #1 driver brand played on the PGA TOUR
· Rose put TaylorMade’s new, not-yet-released UDI (Ultimate Driving Iron) in the bag prior to Thursday’s first round
· Rose’s Tour Preferred ATV 58 & 60 wedges were given a custom grind in advance of the tournament. Additionally, he went from 52* to 53* to add bounce for the tournament
· Rose’s win is the third this season for adidas Golf footwear featuring revolutionary gripmore technology, having also been worn by Martin Kaymer during his victories at THE PLAYERS as well as the 114th U.S. Open Championship
· Rose has been a TaylorMade Golf Staffer since 1999 and an Ashworth Golf Tour Staffer since 2012
· Rose earns 500 FedExCup points and is projected to jump 31 spots to 12th in the standings
· In addition to Rose, fellow TMaG tour staffers Shawn Stefani, Andres Romero and Brendon Todd finished second and T5, respectively

Rose switched from the R1 driver to the SLDR at the 2013 WGC-Bridgestone Invitational and has kept it in the bag ever since. Currently the No. 1 played driver model on the PGA Tour, the SLDR is engineered with a remarkable low and forward center of gravity (CG) placement which results in dramatically reduced spin rates.

Earlier this year TaylorMade introduced the SLDR Mini Driver, a club designed for use off the tee with more distance and forgiveness than a traditional 3-wood. Now, the makers of the No. 1 driver in golf have developed another club designed to find more fairways; the not-yet-released Ultimate Driving Iron. Rose was one of two players who put UDI in the bag, opting to play the 20-degree (#3) at the Quicken Loans National in preparation for the Open Championship.

In addition to his new UDI, Rose also played the Tour Preferred MB irons. He first added them to his bag at the Northern Trust Open in February and has played them throughout the 2014 PGA TOUR season to this point.

Complementing his bag full of TaylorMade clubs, Rose was one of the first on staff to wear adidas Golf’s new adicross gripmore footwear, which he first put into play at the WGC-Cadillac Championship. An evolution in golf footwear, gripmore technology is an innovation in golf footwear cleat design that combines the performance benefits of spiked and spikeless footwear into one revolutionary technology. Alongside unbelievable grip, the adicross gripmore is among the most green-friendly shoe the company has ever created. Also an Ashworth Golf Tour staffer since 2012, Rose wore Ashworth Golf apparel throughout the tournament.