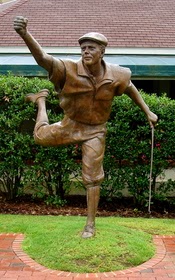 Mike spent a decade caddying for the late, Payne Stewart, and we were thrilled that he came from his home in Mebane, N.C. to support SeeMore and the PGA of America.  The convention room was overflowing with PGA Professionals, as they were intrigued to hear Mike’s testimony before participating in SPi Certification.

Mike mentioned that at the end of 1998, Payne wrapped up a five-year equipment contract that freed him up to play the clubs he wanted to play in 1999.  Mike knew that things were going to be different when Payne told Mike at an Orlando golf store to pick out a golf bag to carry for the season.

During practice rounds weeks later at the AT&T at Pebble Beach, Payne was really struggling with putting on the tricky greens in Monterrey. After Wednesday’s practice round, SeeMore’s Arnie Cunningham explained RifleScope Technology to Payne. Mike said Payne then headed to the putting green and putted for the three hours with the FGP Bronze.

Without playing a single round of golf with the FGP, Payne put the putter in competition the next day.  After a great Thursday and Friday, Payne had to play the toughest course in the rotation on Saturday, Spyglass. In Mike’s opinion, the greens at Spyglass were terribly bumpy. Mike emphasized how only perfectly struck putts that were rolling end over end were dropping.

On Spyglass’ tough par 4, 16th hole, Payne hit his 2-iron approach to 30 feet and drained the putt. Mike then mentioned how Payne made a 10-footer on 17 and another great putt on 18. Sounds a lot like what he would do on the next Father’s Day in Pinehurst.

Sunday’s round washed out at Pebble Beach and the putts that Payne made to close out Saturday won him the Championship.

Phil Mickelson was in the final group with Payne at Pinehurst #2, and Tiger was still in the hunt. The putts that Payne drained coming down the stretch never ceases to amaze me. After going into the 16th trailing by one shot to Mickelson, Payne drained a 30 foot putt for par on 16, made a 5 foot putt for birdie on 17 and made the historic, 20 foot putt for par on 18. It can go down as the greatest putting performance in major championship history, as Payne had 24 putts in the final round at Pinehurst #2 on top of draining the longest putt ever to win the U.S. Open.

Payne won three major championships with Mike on the bag, and it was so neat to hear about Mike’s experiences.

I was especially interested in what Mike told Ted and I over lunch about the difference between PGA Tour players who are able to close the deal when they can sniff the victory, and those who don’t. Mike mentioned that a key difference is breathing, as it leads to relaxing. Players who can relax have a much better shot at consistently performing under pressure.

That sounds simple, but few people have the innate ability to thrive under pressure. SeeMore helped Payne Stewart thrive, and it will continue to help more and more of your students.

Mike’s message showed that Payne used SeeMore to have a system, and that helped his flow be more consistent. When we communicate the SeeMore system to our students, Payne is a perfect example of how feel players can effectively utilize a system. There is nothing rigid about RifleScope Technology. It’s just a simple aid that provides super reinforcement, which all golfers can benefit from.

Mike is a SPi Certified Instructor and specializes in junior instruction. He has four children and the SeeMore Putter Company is proud that he is an integral member of our team.
Posted by Blogger at 10:18 PM