(WASHINGTON, DC) - The District’s top celebrity and political golfers will gather for the inaugural NGS (No Greater Sacrifice) Golf Digest Congressional Shoot-Out in partnership with the PGA Foundation, at Trump National Golf Club June 23. This tournament will serve as a true ranking of golfers in DC, as first published by Golf Digest in 2011. 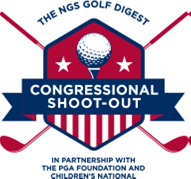 Combining golf and charity in the Washington, DC area, NGS has partnered with Golf Digest and the PGA Foundation to host the Congressional Shoot-Out for seven worthy charitable causes dedicated to sacrifice and helping others. In addition to NGS and The PGA Foundation, Children’s National Medical Center, Armed Services YMCA, Washington D.C.’s First Tee, Dixon Center and THANKS USA will each be on the receiving end of all proceeds generated through the Shoot-Out.

The event will be limited to 20 five-somes; four participants plus one Member of Congress, Celebrity or VIP. Among the VIP golfers playing include: Host Committee Chairman, Bret Baier of Fox News, Donald Trump, PGA Tour Pro’s including Kevin Foley, members of the Washington Capitals, Brit Hume, among others.

The format will be best ball as well as Net and Gross Divisions Individual Stableford for those on the Golf Digest Top 150. The low three Stableford gross scores from each course will participate in a two hole shootout to determine the best golfer on Capitol Hill. Additionally, each participant will play their own ball while using USGA indexes to compete for the winning five-some.

Registration will begin at 7:30 a.m. The tournament will begin with a shot-gun start at 9:30 a.m. The day will conclude at 3 p.m. with awards, closing remarks and a chipping and putting contest with PGA professionals.

To learn more about the upcoming NGA Congressional Shoot-Out and the incredible charitable causes it supports, contact Emily C. Hesselbrock at (561) 624-7671. The event is by invitation only.