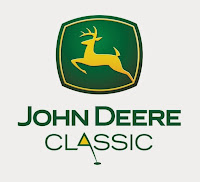 A combination of increased tournament revenues and a John Deere Foundation matching grant of $250,000 to the Birdies for Charity Bonus Fund enabled the tournament to provide each participating charity a 10 percent bonus on the pledges collected - double the promised five percent. It means that a charity that raised $10,000 via the Birdies pledge program will receive an additional 10 percent, or $1,000, for a total of $11,000.

It's the second consecutive year the tournament has helped raise more than $6 million.

"For a tournament located in a community our size to be able to raise more than $6 million for charity two years in a row is an achievement everyone associated with the tournament can be proud of," said Clair Peterson, tournament director of the John Deere Classic. "The final total of $6.32 million reflects the generous character of Quad Cities residents and that of our title sponsor, John Deere, without whom none of this would be possible. On behalf of all 464 charities, thank you." 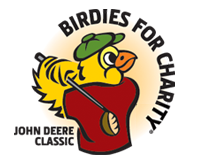 More than 20,000 local businesses and individuals donated to the Birdies program.

Following the announcements, officials distributed checks to charity representatives. Members of the tournament's board of directors personally delivered some checks to various charities. The balance of the checks will be mailed.

PGA TOUR Commissioner Tim Finchem expressed his admiration for the John Deere Classic, which is No. 1 on Tour in the amount of charitable contributions raised per capita based on its population of 375,000.

"The PGA TOUR would like to congratulate the John Deere Classic on another tremendous year of charitable giving in the Quad Cities," Finchem said. "Everyone associated with the event - Deere & Company and other corporate sponsors, tournament staff and volunteers, and the fans who support the tournament - are to be commended for their efforts in helping those in need."

The total amount donated to the charities is the result of a highly efficient three-pronged fundraising effort:

• The tournament's Birdies for Charity program enables individuals, companies, and foundations to pledge to a charity or charities of their choice either a minimum of one cent for each birdie recorded at the tournament from Wednesday-Sunday (2,142 birdies this year). They also may make a lump sum donation.

• Because John Deere underwrites the administrative costs of the Birdies program, 100 percent of each Birdies pledge collected goes to each charity's core mission rather than administrative, operational, or fundraising activities. Such costs typically range from three to four percent or more of revenue.

• The Bonus pool consists of tournament revenues, direct donations and proceeds from special events. Each year, the John Deere Classic promises minimum bonus of five percent with the understanding that a larger bonus will be paid, if possible.

"Every year, John Deere proves what an outstanding corporate citizen it is, and this year they doubled down on that concept," said Birdies for Charity director Kristy Ketcham-Jackson. "Residents of the Quad Cities are fortunate to live in a community where the leading corporation also has a conscience."

This year's charity number brings to more than $56.12 million the total amount of charitable contributions provided to the Quad Cities community since the PGA TOUR first began its annual run in the Quad Cities in 1971.

"Birdies for Charity is extremely grateful that this group of local Chevrolet dealers has made such a strong commitment to our program and to the hundreds of charities we serve in the Quad Cities and neighboring communities," said Ketcham Jackson. "The opportunity for Birdies for Charity donors to win a new Chevy Malibu adds an extra element of fun and excitement to the pledge drive and to tournament week itself."

In 2013, Jordan Spieth won a five-hole, three-man, sudden death playoff to record his first PGA TOUR victory at the John Deere Classic, and earn an exemption to the British Open. Spieth went on to win PGA TOUR Rookie of the Year honors, finish seventh in the FedEx Cup race and earn two points as a first-time member of the Presidents Cup team.