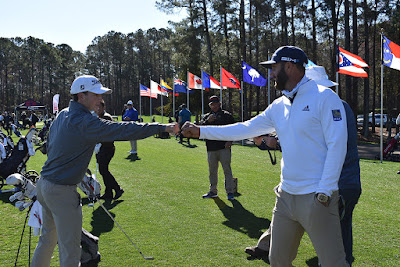 Dustin Johnson World Junior Championship Presented By MyrtleBeachGolfTrips.com to Air Saturday, March 20 at NOON, ET and  Spotlight World’s No. 1 Golfer and The Game’s Most Popular Destination

(MYRTLE BEACH, S.C.) — The Dustin Johnson World Junior Golf Championship has quickly emerged as one of the game’s premier youth tournaments, due in large part to the effort of the world’s best golfer.

The program will be hosted by popular golf media personality Charlie Rymer and tell the story of the tournament’s rise through the eyes of Johnson, who has, away from the spotlight, been an ardent supporter of junior golf in South Carolina. The 60-minute program will include an exclusive interview with the reigning Masters champion, in addition to coverage of this year’s sixth annual DJ World Junior, which featured dramatic conclusions in the boys and girls tournaments.

Also vital to the Dustin Johnson World Junior Golf Championship has been the support of the host course, TPC Myrtle Beach, and the Grand Strand golf community as whole. The nationally televised special will spotlight Myrtle Beach, the game’s most popular destination, and what makes it so attractive to elite juniors and players in search of an unforgettable golf vacation.

MyrtleBeachGolfTrips.com is one of the area’s premier golf package providers, tailoring trip itineraries for groups of any size and offering the best rates available for online tee time booking.

CBS Sports Network, the 24-hour home of CBS Sports, is widely available through all major cable, satellite and telco distributors as well as via OTT streaming service providers YouTube TV, fuboTV, DirecTV and Hulu. Additionally, a live CBS Sports Network stream is available through CBSSports.com and the CBS Sports App by authenticating with select providers. For more information, including a full programming schedule, go to www.cbssportsnetwork.com.