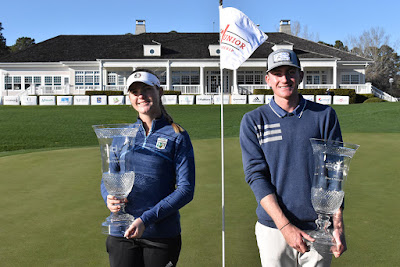 Dunlap entered the final round just one shot off the lead and built a cushion that allowed him to overcome a double bogey on No. 16. Dunlap shot 75 Sunday and finished the 54-hole event at 3-under par, two strokes clear of Luke Clanton (Miami Lakes, Fla.), Brendan Valdes (Orlando, Fla.) and Maxwell Ford (Peachtree Corners, Ga.).

Clanton briefly took the lead after a birdie on No. 10 pushed him to 7-under but double bogies on 15 and 17 derailed his hopes of winning the event. Clanton, Valdes and Ford, the second round leader, finished at 1-under par.

Putrino was 4-over par on the day and tied with Hyo Joon Jang atop the leaderboard when she made a clutch 18-foot birdie putt on TPC Myrtle Beach’s par 5 18th hole to win the event. Putrino finished at 6-over par, one better than Jang and two strokes clear of Savannah Hylton (Hilton Head, S.C.) and Catherine Park (Irvine, Calif.).

Putrino entered the final round trailing Andie Smith (Hobe Sound, Fla.) by three shots. Smith doubled the opening hole and never found her rhythm on a day when scoring was difficult for the entire field.

Forty-nine of the 60 boys were ranked among America’s top 100 juniors, including Auburn signee Brendan Valdes (Orlando, Fl.), who is No, 6, according to Golfweek magazine.

Twenty-five of the 30 girls competing were ranked among America’s top 100 juniors by either Golfweek or Junior Golf Scoreboard, a group led by No. 3 Hyo Joon Jang (Howey in the Hills, Fl.).

With the support of Johnson, the top-ranked golfer in the world, the tournament provided players a PGA Tour-like experience and the opportunity to test themselves against some of the game’s best juniors.

A significant part of the event’s appeal is TPC Myrtle Beach, one of the Grand Strand’s most decorated layouts. TPC Myrtle Beach has hosted the Senior PGA Tour Championship and been ranked among “America’s 100 Greatest Public Courses” by Golf Digest, making it an ideal venue to test golf’s rising young stars.

Johnson’s involvement with the tournament reflects his long-time commitment to junior golf, particularly in South Carolina, where he grew into one of the world’s best players. Through the Dustin Johnson Foundation, which is headquartered in Myrtle Beach, Johnson has donated more than $500,000 to junior golf, sponsoring numerous events throughout the state and helping cover entry costs for kids who need financial assistance.