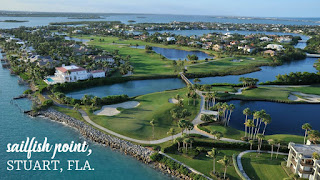 (STUART, Fla.) – Sailfish Point Director of Golf Vic Tortorici has been selected for induction into the South Florida PGA (SFPGA) Hall of Fame and also named PGA Golf Professional of the Year by the second largest section in the U.S.

Tortorici, along with Vineyards Country Club Director of Golf Tom Metzger, are the Hall of Fame’s 44th and 45th inductees. Both are recognized for extraordinary leadership and commitment to the game of golf and service to the SFPGA and SFPGA Foundation. Tortorici is the first section member to be bestowed both honors in the same year.

“Being inducted into the Hall of Fame is an unbelievable and humbling honor,” Tortorici told the SFPGA. “to be included among the golf professionals who make up the South Florida PGA Hall of Fame is the absolute highlight of my career.”

Professionally, Tortorici enjoyed stints on the Asian, European and Korn Ferry Tours and held the lead in the 1983 U.S. Open after nine holes. He began his tenure at Sailfish Point in 1988 and has six team members who’ve worked with him for 20 years. Highly regarded for his retail expertise, Tortorici was named SFPGA Merchandiser of the Year in 1997 and was a finalist for the national award in 1998.

Tortorici’s impact on the game can be felt through his community service and deep involvement in growing the game. He started the Martin County High School Invitational Golf Tournament, assists the Sailfish Point Foundation in awarding seniors at Martin County high schools with college scholarships, and has helped build an SFPGA-sponsored home for Habitat for Humanity.

“Changing people’s lives through the game of golf has been one of the most rewarding parts of my profession and I hope future generations will continue to cherish that aspect of the game,” Tortorici adds. “I will always be indebted to my family, my staff, and the members of Sailfish Point for the last 32 years, all of whom have shown me unwavering support and helped make this dream a reality.”

Approaching 2021, Tortorici is leading the most comprehensive golf course renovation in Sailfish Point’s storied 40-year history. The complete “reimagination,” lead by Nicklaus Design, will yield an eminently playable layout, one that sets up perfectly for players of varying ages, abilities and ambitions. The proposed project schedule entails an April start, re-grassing in August and reopening over Thanksgiving.