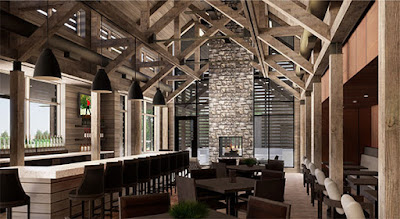 (PINEHURST, N.C.) — As a Dormie Network flagship property located in the Home of American Golf, Dormie Club is being properly prepared to shine in the spotlight.

Most days around the tranquil Dormie Club, located just minutes from North Carolina’s historic Village of Pinehurst, the only noise one can hear is the sound of golf balls being struck. These days, however, the property is abuzz with the sound of construction: electric saws and hammers pounding nails.

For Dormie Network members, these are exciting sounds. They signal Dormie Club’s ongoing enhancements both on and away from the golf course, which include a 16,600-square-foot clubhouse, a stand-alone pro shop and 15 cottages of several sizes, all reflecting the rustic, secluded nature of the club’s golf course and its surrounding environment.

Around the highly regarded Bill Coore and Ben Crenshaw layout, the bunkers have been restored using the Better Billy Bunker system, cart paths have been enhanced, winding walking bridges have been constructed, several new tee boxes accessible by walking trails have been added, landscaping has been refreshed, hundreds of trees have been removed to improve views around the property — while a new comfort station, maintenance facility, practice putting green and parking area are also being constructed.

All of the Dormie Club enhancements are slated to be completed by June 2021.

The club, built in 2010 and acquired by Dormie Network in 2017, was widely heralded upon its debut. A walking golf course, Dormie Club was crafted into more than 300 rolling acres of land, and features 100-foot elevation changes, two natural lakes, and hardwood and pine forests.

Dormie Club is one of six private destination golf clubs owned and operated by Dormie Network, each of which has experienced significant renovations and/or expansions following their acquisition. The network does not pass on any assessments to members and holds no debt on any of its properties.

We took a recent tour of Dormie Club with General Manager Tony Chapman, to experience the ongoing construction.

The clubhouse groundbreaking was held in early 2020. Anchored by a large, two-sided fireplace and vaulted ceilings, the clubhouse includes underground golf cart parking and boasts several areas with ample seating. The clubhouse will provide the ability to host 32 in the dining room, 24 in the private dining space, 12 in the circular wine room, 42 in the lounge, 28-plus on the covered patio and eight in the private, covered patio.

The cozy lounge welcomes members in, with bar, table, and soft seating options, as well as a two-sided fireplace that opens to the adjacent outdoor patio. Both the lounge and dining room offer views of the 18th green, with seating capacity of up to 150.

Tastefully set into the hilly landscape, 60 beds will be available at Dormie Club across three lodging options located a short golf cart ride from the clubhouse. Each of the 10 standard cottages features four bedrooms with private bathrooms, vaulted great room space with snack area and 55” TV seating area, and an exterior patio with golf course views.

The four executive cottages include four bedrooms and private bathrooms, with steam shower function, a kitchenette and seating area perfect for cards or board games, and a separate TV lounge space with gas fireplace, course views and an exterior patio.

“The difference is the footprint of the living area, plus the executive cottages will have a fire pit outside of most of them and the lodging rate is a bit higher,” said Chapman. “But I think members will agree that it’s definitely worth it, because the executive cottages have a full bar and some of the bathrooms are double sinks, which is perfect if you’re here with your spouse or significant other.”

Chapman described the expansive owner’s cottage as being, “pretty out of bounds.” This two-story cottage features four bedrooms with private bathrooms and steam showers, and a kitchenette and dining space connecting to an exterior deck that overlooks the lake next to the No. 5 fairway. The lower level showcases an entertainment area equipped with bar, TV lounge, golf simulator and on-grade patio.

“Members and guests can even fish off the dock,” Chapman said. “All dining will be out of the main clubhouse. So, on a typical day, you’ll drive to the clubhouse, park and get your own cottage cart to drive around the grounds. Then, you’ll get a golf cart to be taken on the golf course, so we can store your clubs up here. Staff get started early in the morning, swap out carts and get you started.”

On a particularly sweltering day, Dormie Club‘s bent grass greens are in pristine condition, despite having been punched just weeks earlier. “These are the best bent grass greens you will ever see in July,” Chapman said. “We’ll keep the bent grass greens, because we feel like we’ll have something to offer that nobody else does. If it’s in the middle of a really hot summer, we can always funnel our members to Ballyhack [Golf Club, just a couple hours’ drive away] and some other places, and give our course a little bit of a break.”

With walking bridges and numerous walking paths to the tee boxes and greens throughout the property, Chapman said Dormie Club is, “going back to our walking philosophy. We will have caddies here and the course will be fun to walk.”

The new, on-course comfort station will be accessible to four different holes. “It’s essentially an Honor System station,” Chapman said. “We will have homemade ice cream in there and popcorn. We’ll have a bar and there’s potential to staff it for events.”

The new maintenance facility is being constructed on the other side of the green on No. 5. The extended driving range will eventually measure about 310 yards. On the back end, there will be two indoor hitting bays. “You’ll be able to walk right out of the clubhouse and there will be a putting green about three times the size of our old one,” Chapman said. “There is potential at some point to do a golf school here, if that’s the direction that we decide to go. I know we’ve had some outreach from some top 100 [instructors] that would like to do one here. So, we’ll see. We’ll see what happens there.“

Chapman said Dormie Club is networking to prospective members who live more than 50 miles from the Sandhills. “Charlotte for us should be great, because of Ballyhack — at no other club do you get to use two clubs,” he said. “You live in Nebraska, you’re playing Nebraska. If you live in San Antonio, you’re playing there. But if you live in Charlotte, you’re two hours here and three hours to Ballyhack, so you’re getting the regular use of two clubs. Raleigh is an hour and then Richmond is three hours and you’re still getting the use of a couple of clubs. We can incorporate Cary — which is 52 miles and we realize how much Cary’s growing and want to be in that market — we didn’t want to price us out of that market, either.

“We’re way more geared to the national members, to the member who is looking for a secondary club to entertain clients or guests.”

With the wide range of enhancements being performed a decade since its opening, Dormie Club will soon be far more than a special place. “These are exciting times around here,” Chapman said. “We just hired a concierge. We’ll have our head chef for the network, Tony Pope, as the chef here and I will hire a pretty good number two, since Tony will be traveling a lot with the network. Our events manager, Todd Harrington, who was at Nanea [Golf Club in Hawaii], just moved here too.

“Having moved here recently, being able to see this thing from start to finish, and to know network ownership wants to be here for the long term is wonderful,” he said. “Anything that Zach [Peed, Dormie Network President] does, is always geared to the membership. It’s not revenue driven. He couldn’t be a better owner.”

Learn more at www.DormieNetwork.com
Posted by Blogger at 6:30 AM