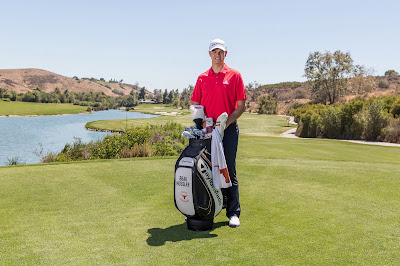 (Carlsbad, Calif.) – TaylorMade-adidas Golf, maker of the most-played driver on the PGA TOUR for 16 years and counting, announced today the final member of its ’16 rookie class, solidifying the company’s position as the strongest Tour staff in golf with the signing of 2016 Haskins Award winner Beau Hossler. Hossler joins Jon Rahm, Jordan Niebrugge, Romain Langasque and Jonathan Garrick on a staff that already includes the #1 & #2 players in the OWGR (Day, Johnson) and four players in the top 15.

Hossler (@beauhossler), concluded his amateur career atop Golfweek’s men’s collegiate individual ranking, #2 in the Scratch Players World Amateur Ranking and #3 in the World Amateur Golf Ranking , possessing a competition resume that rivals some of the best golfers to ever play at the amateur level. The California native briefly led the U.S. Open at the Olympic Club midway through the second round as a seventeen year old, ultimately finishing T29. Most recently, he received the 2016 Haskins Award, presented to the most outstanding male collegiate golfer of the year as voted on by peers, coaches and golf media.

Long before turning professional, Hossler already had ties to TaylorMade, having worked with one of golf’s most prolific and influential instructors, Jim Flick, for six years as a junior golfer. He then enrolled at the University of Texas, immediately earning Big 12 Newcomer of the Year and All-Big 12 Team selections as a freshman. In the subsequent two years, Hossler amassed 6 wins, becoming one of the most decorated collegiate players of his generation and one of the most prolific players in Longhorns’ program history.

Hossler, currently recovering from a shoulder injury, will make his professional debut at a tournament to be determined later this year and will play a full bag of TaylorMade metalwoods, irons and ball in addition to wearing adidas Golf footwear and apparel.

“Based on the tremendous amateur careers of each these fine young men, I’m confident in calling this the most impressive rookie class in recent memory,” said Chuck Presto, Senior Vice President, Global Sports Marketing. “We’re elated to officially welcome Beau to our rookie class that already includes Jon, Jordan, Romain and Jonathan. We look forward to watching them shine on golf’s biggest stages while playing the best performing golf products in the world. It’s an exciting time for all as they embark on the next stages of their respective careers and we couldn’t be happier to have each of them on Team TaylorMade.”
Posted by Blogger at 1:30 PM