The official poster for the 145th Open depicts—and is—a postage stamp; Plus, he’ll be on-site at Royal Troon painting throughout the tournament

(Flagstaff, Ariz.) – Lee Wybranski — the noted American artist who has painted official posters for the last nine U.S. Opens including the most recent at Oakmont Country Club — has created the official poster for this year’s Open Championship, to be held at Royal Troon, July 14-17.
Furthermore, Wybranski will be on-site at Royal Troon documenting each day’s action in a series of original artworks. 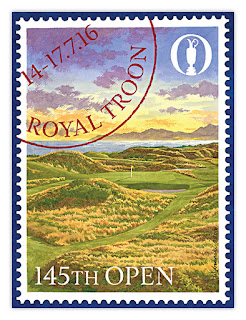 The poster for the 145th Open Championship shows the world-famous 8th hole, known as the “Postage Stamp” for the small size of its raised green. As part of what Wybranski calls a “visual pun,” he painted the poster so it resembles a postage stamp, bordered by perforation holes and including a postmark in the upper-left corner with the tournament’s date and location.

“Royal Troon is one of the world’s best-known courses and the ‘Postage Stamp’ hole it’s most famous,” Wybranski said. “So I didn’t simply want to do the obvious straight-forward depiction but to have some fun and be a little more clever while still creating an artistic rendering of this iconic scene.”

During the tournament, Wybranski will be on the course each day for a few hours, capturing the energy and excitement unique to The Open Championship.

“I love the idea of documenting the championship live, as it’s going on,” said Wybranski, who attempted the same during last year’s Open at St. Andrews but was stymied by the weather. “This year, I’ll paint for a few hours each day and the R&A will tweet about it, post images on Instagram, and otherwise document my documenting.

“I’ll actually be painting the action, with the crowds, the pros playing, and everything around it. The finished pieces will be looser, more sketch-like than my more formal work because I have to move quickly. In a few hours, the light changes, the shadows are all different, so I’ll have to work fast. But I can’t wait.

“Something else great about painting in public is that whenever I do it, people stop and ask about it. I love talking to them about what they see, getting their reactions to my renderings, showing them how my art reflects what they see. The R&A’s social-media engine will let people know what I’m doing and where they can find me.”

For more information on Wybranski and to buy copies of any of his many major-championship posters and other works go to the web site or call 928-310-2152.
Posted by Blogger at 9:57 AM