The DT Smart Putting Training Aid actually reads the slope for the golfer and, over time, will help any golfer challenged when judging the slope to reach the hole

(GERMANTOWN, MD) - The DT Smart Putting Training Aid, a slope-detecting putter that helps golfers develop a more precise putt, has been launched on the crowdfunding website Kickstarter with the creator setting a $10,000 goal to get the golf-training aid into production. 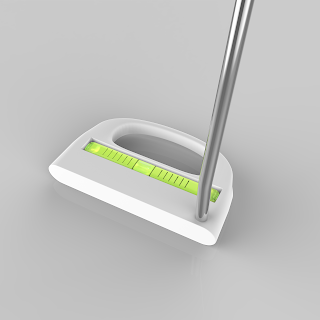 Dmitriy Advolodkin, president of DT, says he developed the training aid specifically for golfers who have trouble reading putting greens.

“It’s really a golfer’s personal putting caddy,” Advolodkin said. “The DT Smart Putting Training Aid actually reads the slope for the golfer and, over time, will help any golfer challenged when judging the slope to reach the hole. By placing the putter flat on the putting green, golfers will immediately know which way the putting green slopes, which helps them end up with a smooth and easy putt. Golfers will be amazed at how precise their putt will be.”

Advolodkin says he got the original idea for the training aid from his own personal challenges with putting.

“As a long-time golfer, I found it really tough to tell how the putting greens would roll and where slopes and bends were, but when I went to read up on how to improve judging greens I found there was no tool out there that was really helpful,” he said. “After I created the first prototype, it worked really well, and now I can read the slopes really well without using the training aid.”

From his initial idea to current production stage, which took place over the last year, he says his team has constantly improved the training aid. Advolodkin stresses that it is a training aid only and cannot be used in competition play – but golfers who compete often and have trouble putting “will certainly be satisfied with the results after using it and then competing on any course.”

The actual retail price of the DT Smart Putting Training Aid is $150, but during the Kickstarter Campaign over the next 30 days it is offered at an early-bird price of $80 – with backers receiving more discounts when they purchase two or more.

For more information, and to pre-order the DT Smart Putter, visit https://www.kickstarter.com/projects/1656480107/dt-smart-putting-training-aid. Check out the company's website at www.dtouchputter.com.
Posted by Blogger at 2:04 PM