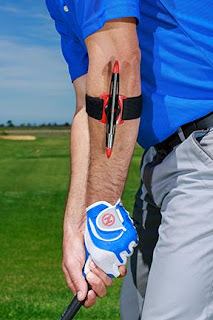 After a shaky start to the year and three consecutive missed cuts, Ahlers has put in a lot of what he describes as “hard work.”  He credits some of his success to a change in his mental approach to the game as well as his discovery of the SwingClick PLUS training device, located in George, South Africa, which is also the home base for PGA Tour champions Louis Oosthuizen, Branden Grace and Ernie Els and where Ahlers recently moved to start a family.

SwingClick PLUS is the world’s #1 transition trainer that helps golfers master their timing, tempo and rhythm.  The lightweight training device straps to your forearm and clicks at three key points of the swing: at the top of the backswing, at impact and at follow-through.

SwingClick PLUS trains your brain like a metronome building and engraining muscle memory to maintain a smooth rhythmic swing just like the pros.

“I’m a feel player,” said Ahlers. “I’m not a technical guy when it comes to playing golf. The Swingclick gives me a bit of a pause at the top, which allows me to create a smooth transition and allows me to get my club back to the right position.”

Timing, tempo and rhythm are critical elements to winning for tour players when the pressure is on.  Players often talk about having to grind it out on Sunday and keep it in play even when they may not be hitting their best shots.  From a mental perspective, being able to slow everything down and maintain your rhythm is the key to winning or losing.

“When playing under pressure, golfers get out of their natural rhythm becoming too quick at the top,” said Mike Quinn, Managing Director for SwingClick.  “SwingClick PLUS helps golfers to feel and know their exact transition point at the top of the backswing.”

“Keeping my rhythm under pressure in a tournament is key to playing great golf,” said Ahlers. “I love the SwingClick PLUS because it’s the easiest way to practice your tempo and rhythm.”

SwingClick PLUS has a sleek, non-intrusive design with an adjustable strap.  You can use it with your own clubs, on the range, or on the course.

The newly updated SwingClick PLUS is available in blue, red, orange, and purple for $39.99 on Amazon.com, Amazon.ca and swingclickgolf.com. The original SwingClick is $29.99.  Quantity discounts are available for golf academies, summer camps and PGA professionals.  For more information and video tips, visit swingclickgolf.com.
Posted by Blogger at 10:30 AM