(Flagstaff, Ariz.) – When golf holds its biggest events, Lee Wybranski paints their posters. This has proven true again in 2016, and Wybranski is capping the year with two of the game’s most exciting spectacles—the PGA Championship and the Ryder Cup, both conducted by the PGA of America. 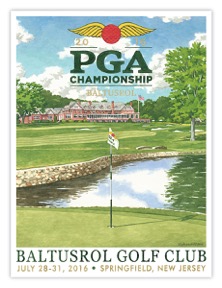 Wybranski’s official poster for the 98th PGA Championship—to be held July 28-31 at Baltusrol Golf Club in Springfield, N.J.—portrays two of the famous club’s most iconic sights: the Tudor revival-style clubhouse and the picturesque, par-3 fourth hole.

“I got out of the way and let the grandeur of Baltusrol carry the day,” says Wybranski of his fourth poster for a PGA Championship. “I always knew we were going to work with the clubhouse, because as great a course as Baltusrol is, it is known for that beautiful big clubhouse, too.

“No. 4 is one of the signature holes, but I wanted to take a different view, from the green back, askance to the line of play. It also brought water into the foreground and I always like bringing water into the picture.”

For the biennial Ryder Cup—being played at Hazeltine National Golf Club in Chaska, Minn., Sept. 30-Oct. 2, 2016—Wybranski is, for the first time, preparing two paintings, both an official event poster showing the course plus a first-time-ever, last-minute commemoration of the members of the U.S. and European teams.

The poster depicts the 16th hole at Hazeltine, which will be played as the 7th for the Ryder Cup. “It’s one of the most photographed holes out there, but I tried to take a different look,” says Wybranski. “I wanted to include the replica of the Swilken Bridge on that hole, which is dedicated to Payne Stewart, who won his second major championship there in 1991. A bridge is a natural element to work into any painting, but when I saw the plaque about Payne, I felt that honoring him was a nice tip of the cap to the Ryder Cup, in which he played such an important part, and to the sportsman he was.”

Wybranski’s other Ryder Cup poster will focus on the trophy and the teams. “But it will have to wait to be completed until the bitter end because the last player isn’t announced until the Sunday before the competition begins,” explains Wybranski. “It will be one of the very few items with the full list of players from both sides.”

Another Wybranski creation is an embossed metal sign with a golf theme. “It’s of my second favorite view at Hazeltine, from the top of the hill on the 10th fairway with the 10th and 16th greens in view.”