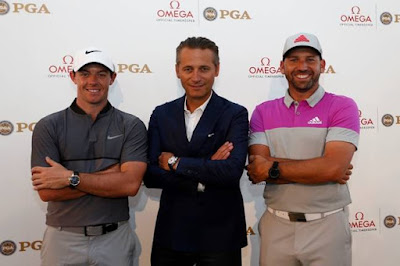 World No. 4 McIlroy and No. 10 Garcia participated in a special ribbon-cutting ceremony with Raynald Aeschlimann, OMEGA President and CEO, to officially open the OMEGA Exhibition at Baltusrol Golf Club.

After the ribbon-cutting, McIlroy and Garcia toured the “PLANET OMEGA” exhibition, which tells the story of OMEGA’s diverse heritage as well as the many present-day activities of OMEGA, all displayed through enduring stories and iconic timepieces.  The space is designed to give visitors the opportunity to learn more about the OMEGA brand and, this year, highlights OMEGA’s role as Official Timekeeper of the PGA of America and the Olympic Games.

McIlroy and Garcia then left their “mark” on the OMEGA Exhibition, each autographing their photo wall inside the space, and met with the media.

The 2016 PGA Championship, held July 25-31, marks the 98th edition of one of the most anticipated golf events on the calendar and the season’s final major.  The greatest golfers in the world – including McIlroy, Garcia and their fellow OMEGA Ambassador Harris English – will compete for the Wanamaker Trophy. OMEGA, an Official Patron of The PGA of America, is serving as Official Timekeeper of the PGA Championship for the sixth-straight year and, in 2014, OMEGA extended its historic partnership with the PGA through 2022.