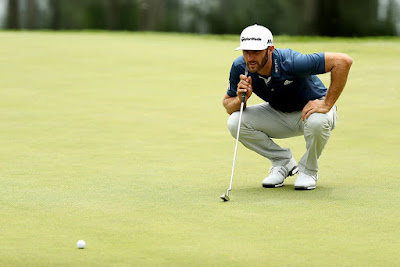 (RELEASE) - Back on Tour after claiming his first Major championship at the U.S. Open, Dustin Johnson gamed his same winning TaylorMade metalwoods, irons, wedges and ball in the same custom red, white and blue Tour staff bag for his second win in three weeks, lifting him to #2 in the OWGR.

What You Need To Know:
· Johnson didn’t need to make any significant changes to his winning bag. This week he opted to be built a new 54° Tour Preferred Chrome EF wedge in the same specs to benefit from the added spin of fresh grooves.
· Johnson’s win is the 10th this year for TaylorMade's M drivers and 7th in the last 8 weeks (also: Day, Garcia, McGirt, Berger, Johnson and Hurley).
· Johnson plays a 10.5* M1 driver (set to 11*) with a Fujikura Speeder Evolution 2.0 Tour Spec 661X. He has both weights centered (neutral position).
· Johnson's M1 fairway is a 16.5* HL with both weights toward the toe to help to hit the fade he plays with the majority of his shots.
· Johnson leads the PGA TOUR with 10 top-10 finishes this season.
· DJ’s third-round score of 66 was his best third-round score during this PGA TOUR season.
· Johnson's win marks the 9th win for the TOUR360 Boost footwear.