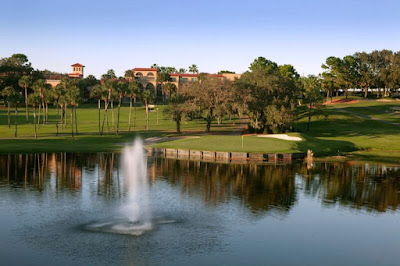 (Howey-in-the-Hills, Fla.) – With more than 1,200 courses, Florida is the country’s king of golf. It had to start somewhere, and one of the Sunshine State’s grandest courses will celebrate its 100th birthday in 2017, with visiting golfers invited to join the festivities.

Kicking off this historic period, Mission Inn is offering this commemorative golf getaway package with all the inclusions above at $194.50 per person, based on double occupancy. This is a savings of 35% off the 2017 published price.  Resort fee and taxes are extra. Third and fourth nights are available for $155 per person, per night with this package.

The 1917 course, originally known as the Floridian, was one of the first in the state to feature grass greens rather than the oiled-sand greens common a century ago. It was one of only two courses in the state built to what was then considered the “regulation” length of 6,300 yards.

Christened “El Campéon”—The Champion—by the Beucher family who bought the resort in 1964, the course has been modernized to current playing standards while still showcasing the area’s natural beauty. Unique to central Florida are the 85 ft. elevation changes on six holes of former rolling citrus groves and hardwood forests. El Campéon exceeds most players’ expectations having been rated # 2 nationally in the most recent GolfAdvisor.com player surveys. It is a true example of historic class and current quality.

For additional information and reservations, visit www.missioninnresort.com  or call 800-874-9053.
Posted by Blogger at 11:42 AM