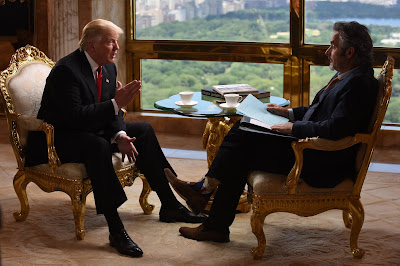 Presumptive Republican Presidential Nominee to Discuss: U.S. Presidents Playing Golf; Reaction to the PGA TOUR Moving its WGC Event From Miami to Mexico; Distrust for the Media; and How He Doesn’t View Himself as a Politician

The interview, which took place at Trump’s Manhattan apartment residence June 22, covers a wide spectrum of topics – both political and personal, and of course golf – including:
- Why he doesn’t consider himself a politician
- U.S. Presidents playing golf
- Whether or not he will use a teleprompter at the Republican National Convention
- Reaction to the PGA TOUR’s decision to move its World Golf Championship (WGC) event from Trump’s Doral property in Miami to Mexico
- Distrust for the media: Trump – “The media to me is one of the most dishonest groups of people I’ve ever dealt with.”
- Golf’s return to the Olympic Games: Trump – “I think it’s a great thing for golf, having it in the Olympics”
- An admiration for professional golfers, including Arnold Palmer, Jack Nicklaus and today’s current wave of young stars
- His recent trip to Scotland for the reopening of Turnberry
- What’s next if he doesn’t win the presidential nomination
- Highlights from Feherty’s initial interview with Trump in May 2012