Why Do So Many Golfers Have Back Problems? 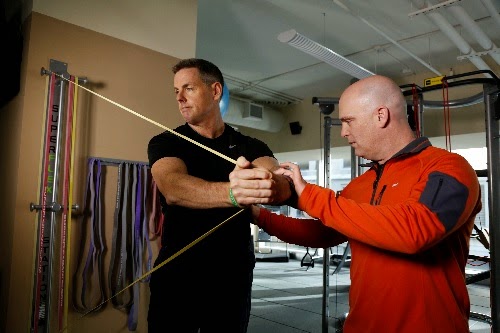 Ben Shear, trainer to PGA Tour stars and Director of Performance at Golf & Body NYC, explains how weekend golfers can take better care of their backs

(New York, NY) - What’s the most punishing hazard in golf? A bad back. No bunker, pond, or lightning-fast green has hurt so many golfers. Last week, more than half a dozen Tour pros—including fan favorites Fred Couples, Jay Haas, and Craig Stadler—had to withdraw from the U.S. Senior Open Championship due to back issues. And we all know weekend players who have had to limit their golf or give it up entirely due to balky backs.

So why do so many golfers have bad backs?

According to Ben Shear, Director of Performance at New York City’s Golf & Body and trainer to a number of PGA Tour stars, it’s volume -- the pros have hit so many balls for so many years. “The speed they generate and the millions of balls they hit, and swinging in only one direction, throughout their lifetime takes a toll. Three or four hours of exercise a week is not going to undo years and years of overuse.”

But amateur golfers, says Shear, have a different set of problems, and there’s a lot they can do to limit the damage.

“The biggest problem amateurs have is sitting too much—behind a desk, in the car, in front of a computer. We sit and stand in a rounded position, hunched forward, constantly stretching our muscles along the posterior [rear] side of our bodies and pulling them tight. Therapists call that ‘locked long,’ and it puts constant stretch and pressure on the muscles in our back, shoulders, and hips.

“Now take those stretched muscles, rounded shoulders, and weak hip flexors, and glutes to a golf lesson or to the course, and, without doing any stretches, start swinging. That locked upper back and those weak, tight hips can’t turn, and what’s caught between them? The lower back. It takes the brunt of all that turning and torqueing. That’s enormous pressure on one part of the body and it’s going to give.”

Shear’s advice? “I say it all the time.  If you play golf, start by getting a physical assessment from a trainer or therapist who understands golf.  Learn what your body can do and don’t ask it to do something else.

“Then find a golf pro who will teach you moves that you are capable of making. Don’t go to a pro who only teaches one method if your body can’t make the moves that method demands. That’s a waste of time and money, and could do your body more harm than good.”

Combining physical training and golf instruction is the mission of Golf & Body NYC, where the therapists, trainers, and golf pros work together for the golfer’s greatest good both on and off the course. “We assess the golfer’s whole body,” explains Shear, “looking for limitations and other concerns. Then we coordinate with the great team of golf instructors here so they don’t try to teach something that the student can’t do.

“Once the golfer knows more about his or her body, we hope he’ll start an exercise program to work on any deficiencies and fix those weak, stretched muscles. But even if you’re never going to exercise, get assessed.”

In the spirit of the British Open, which tees off at Royal Liverpool Golf Club in northwest England this week, Shear offers some advice for golfers making the trip of a lifetime to play in Scotland, Ireland, and elsewhere in Britain where it is often cold and damp. “Warm up before you play,” he says. “You need to get the blood flowing and increase your core body temperature. Stretch, do some basic activation exercises, spend a few minutes first on an exercise bike or treadmill. It’s absolutely critical that you get the blood flowing before teeing it up when it’s cool and wet.”

For more information about Golf & Body NYC and its fitness programs for golfers, call (212) 244-2626 or visit www.golfbodynyc.com.
Posted by Blogger at 9:46 AM