(HUNTINGTON BEACH, CA) – Srixon and Cleveland Golf congratulate staffer Graeme McDowell for his victory Sunday at the 2014 Alstom Open de France held at Le Golf National in Paris, France.  McDowell of Northern Ireland fired a 4-under 67 in the final round to clinch the come from behind victory over fellow Srixon and Cleveland Golf staffer Kevin Stadler.  McDowell overcame difficult weather conditions and an eight-stroke deficit on Sunday making five birdies and a bogey to earn the one-stroke victory with a final score of 5-under 279. 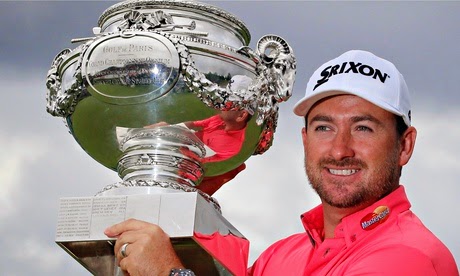 “That goes back to my upbringing a little bit in my teens, playing through all weathers and conditions,” said McDowell.  Playing golf in bad weather is an art form.  Some guys are good at it and some guys are not.”

Stadler, who had led through each of the first three rounds, made three birdies but dropped eight shots for a final round 76 and a share of second place.  Stadler had a chance to win the tournament on the final hole, but he missed a long birdie putt and was unable to force a playoff with McDowell.

For more information on Graeme McDowell, Kevin Stadler and the Journey to Better, visit: http://srixon.com/thejourney/

For more information on Cleveland Golf/Srixon, XXIO and Never Compromise or their staff players, visit www.clevelandgolf.com, www.srixon.com, www.xxiousa.com and www.nevercompromise.com.
Posted by Blogger at 9:07 AM