(CARLSBAD, Calif.) – The old golf adage “drive for show and putt for dough” was on real-time display at the Sentosa Golf Club in Singapore, site of the 2014 HSBC Women’s Champions event.  TaylorMade-adidas Golf Tour Staff professional Paula Creamer (@ThePCreamer) bombed her tee shots using the new TaylorMade JetSpeed driver and relied on steady putting, including an unthinkable 75-foot birdie putt to capture the event in the second playoff hole. 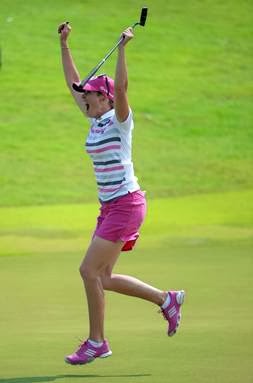 Trailing the leader four strokes entering the final round, Creamer chipped away and eventually pulled even and into a playoff.  Creamer and her opponent played the Par-5 No. 18 twice in the playoff. After a par the first time around, Creamer nailed the green in regulation setting up one of the best birdie putts of her career.

The win was Creamer’s first since the 2010 U.S. Women’s Open. It also moves her into first place for the Race to CME Globe, a season-long points competition that debuted this season.

“It might be one of my favorite wins, and that's going -- taking a pretty big leap right there,” said Creamer. “But you know, it has, it's been almost three years and you know, so much has happened…It has been coming and it just shows you perseverance. That's why I love the game. I work hard for this reason. And holding that trophy, gosh, it was so nice.”