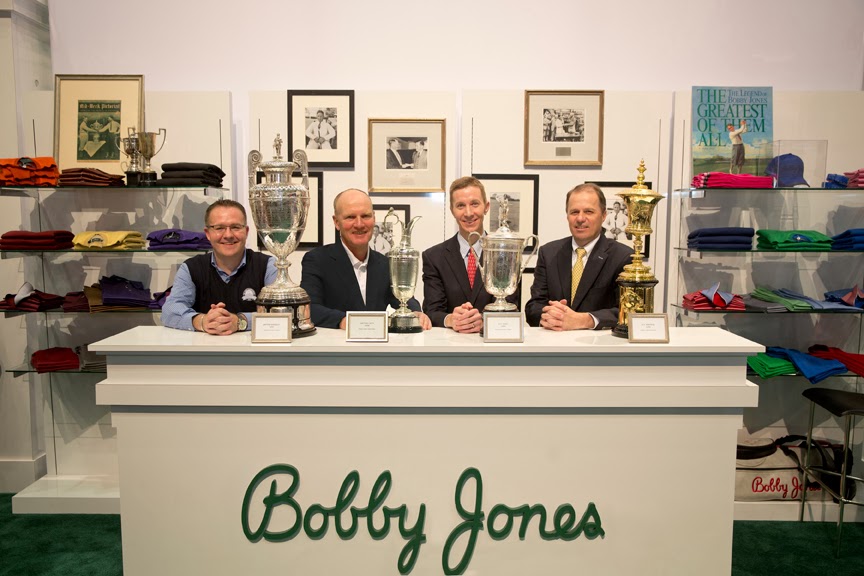 84 years ago, Robert Tyre Jones, Jr., mystified the sports world, by becoming the only man to capture all four of golf’s major championships in a single calendar year.  Jones’ Grand Slam started with a British Amateur triumph on the Old Course at St. Andrews, and continued through the United Kingdom with an Open Championship victory at Royal Liverpool Golf Club. The third leg of the Slam was achieved when Jones won the U.S. Open at Interlachen Country Club in Minnesota, and finally the historic feat was completed with a victory in the U.S. Amateur at Merion Golf Club outside Philadelphia.  All four clubs are proudly represented in the photo below.

“The Bobby Jones brand is blessed to have a namesake with a historically significant and unmatched accomplishment in golf, or in all of sport” said Andy Bell, President/CEO of Jones Global Sports.  “So, when we celebrate a brand milestone like our 25th Anniversary, it is important we honor that achievement and Mr. Jones’ life.  We were excited to give many in the golf industry the chance to see the Grand Slam trophies in person and have their picture taken with such amazing pieces of history.  It was a pleasure to share the experience with so many people that care deeply about the game of golf and hold Mr. Jones in the highest regard.  You could see the sheer joy and wonder in their faces as they stood with the trophies and understood the enormity of what he accomplished in 1930.”

For a quarter century, Bobby Jones has provided luxury men’s and women’s sportswear, including polo shirts, button downs, shorts, slacks and sweaters/knits to demanding consumers looking to exude a classy, cool confidence on and off the course.  The Bobby Jones brand can be found at the finest golf clubs, resorts and haberdasheries in the world.  For more information on the Bobby Jones brand, visit www.bobbyjones.com.
Posted by Blogger at 11:00 AM