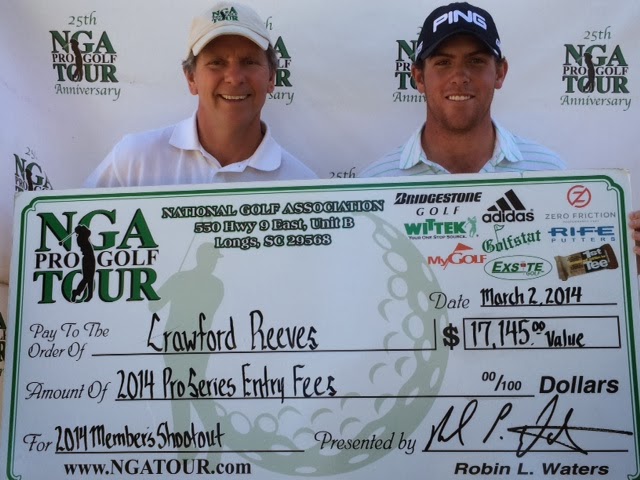 (Valdosta, Ga.) – A Shootout in golf is usually known as a winner take all style event and, while there was a purse for this year’s NGA Tour Members Only Shootout, every player entered this weekend’s season opening event trying to get the top prize; Free Pro Series Entries for the 2014 season! After two rounds of play at Kinderlou Forest in Valdosta, Ga., host site to the Web.com Tour South Georgia Classic, two players stood above the rest at 5 under par, veteran and past NGA Tour winner Tyson Alexander (Gainesville, Fla.) and rookie Crawford Reeves (Greenville, S.C.), starting his first full season as a professional after a stellar career at Clemson University where he became Clemson’s first player to be named to the Academic All-ACC team for four consecutive years. After 2 holes of sudden death it would be the rookie who would come out on top over the former Florida Gator, earning a total first place prize valued at $18,145.

While Reeves surely has a leg up in the Rookie of the Year race, if history is any indicator, he may have his sights set on bigger goals for the year. Last year’s Shootout winner, Vanderbilt alum Jon Curran, went on to win twice more on the NGA Tour Pro Series, garner Player of the Year Honors, and earn exempt status onto the Web.com Tour for 2014 via the Web.com Tour Qualifying Tournament.

“(The win) takes a lot of pressure off. You don’t have to worry about that extra little bit every week (winning the free tournament entry fees),” exclaimed Reeves, “That’s pretty much one of the biggest expenses we have and to be able to have that taken care of is a big deal.”

Reeves shot an opening-round 2-under-par 70 March 1 followed by a 3-under-par second-round 69 March 2. Alexander shot 5 under par Saturday to grab the first day lead followed by an even par 72 Sunday to stay in the playoff.

For full NGA Tour Members Only Shootout results please visit: http://www.ngatour.com/finalresults/pro2014005/#.UxYWLT9dVh4
Posted by Blogger at 11:05 AM