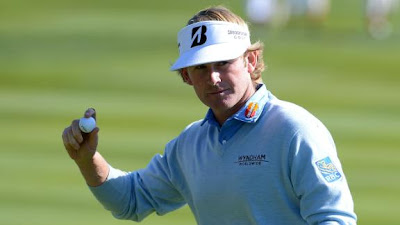 (Covington, Ga.) — Bridgestone tour team member Brandt Snedeker, the hottest player in golf over the past six months, treated golf fans to another world-class performance this week at the 2013 AT&T Pebble Beach Pro-Am.  Sneds used a final round 65 to command a two-shot victory and vault himself into a career high 4th place in the Official World Golf Rankings.

Snedeker tamed the trio of famed courses (Monterey Peninsula Country Club, Pebble Beach Golf Links and Spyglass Hill) in a tournament record 19-under par, recording rounds of 66-68-68-65. In a remarkable display of consistency, Snedeker has recorded scores in the 60’s in 16 of his last 17 rounds played and has recorded 4 top 3 finishes in his 5 starts this season.

Snedeker’s win at Pebble marks the fifth PGA TOUR title of his career, and extends his early lead in the 2013 FedEx Cup point standings.

In his victory, Snedeker relied on Bridgestone’s TOUR B330 golf ball, J40 Cavity Back Irons and J40 Black Oxide Wedges.

Extending his blazing start to the season — including two consecutive runner-up finishes — Snedeker relied on the consistency and spin performance of the TOUR B330 and the precision shot-making of the J40 Cavity Back irons to get off to a hot early start on Sunday – negotiating the opening 7 holes of his final round in 5-under par.

“I am really confident in my equipment. The reliable performance of the B330 balls and the feel of the J40 irons lets me execute shots successfully in a variety of conditions,” said Snedeker.

“Sneds has been a member of the Bridgestone tour team since our brand’s U.S. introduction in 2005, and it has been just incredible to follow his ascension to the ranks of the game’s elite over the past couple seasons,” said Dan Murphy, Vice President of Marketing – Bridgestone Golf, Inc.  “We’re excited for Sneds and his family, and , like the rest of the golf world, we can’t wait to see what’s next.”