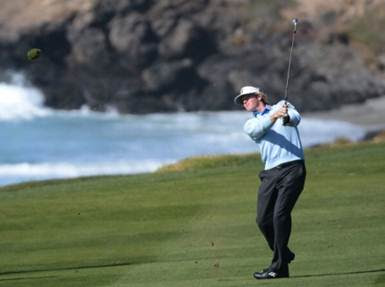 (CARLSBAD, CA) – adidas Golf Staff Professional Brandt Snedeker completed a near-perfect final round to capture the AT&T Pebble Beach Pro-Am by two strokes. Firing a 65 that included one eagle, six birdies, and 10 pars, Snedeker turned in a total –19 under and further secured his spot as No. 1 in the FedExCup standings. The win also gave the new adizero Tour footwear its 1st PGA Tour victory, since its public release on January 24.

Of the five events Snedeker has played in 2013, he has a 3rd place finish, two 2nd place finishes and one victory.

Today’s win on the PGA Tour follows the adizero Tour win last week on the European Tour on TaylorMade Golf Staff Professional Stephen Gallacher at the Omega Dubai Desert Classic.
Revolutionizing the fit, feel and shape of adidas Golf footwear, the new adizero line has been specially built on the principle that you start with zero and add only what is essential to perform, and deliver everything a golfer needs to finish strong when it’s needed the most.