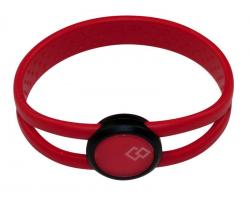 According to Taylor Herber, H2 Golf Company Vice President of Sales and Marketing, "We weren't sure what to expect at the 2013 PGA Merchandise Show as this was H2Golf Companies first year representing the Colantotte Trion:Z Brand. We were pleased with the outcome of this year having created several new leads, new accounts, and writing several pre-book orders for the Spring season. It was also served as a great avenue to launch our newest Colantotte Trion:Z product, the Boost Wristband, which proved worthy as our number one pre-book seller this year at the show."

The new, contemporary, and bold, Boost Wristband is the next generation of silicone wristbands from Colantotte Trion:Z. It follows the recently introduced Flex Wristband and the PGA Tour Professional's favorite Active Series as it is both water and sweat resistant. These unique wristbands combine fashion with functionality.

Brand Recognition was achieved at the 2013 PGA Merchandise through several media avenues. The Boost Wristband as well as other Colantotte Trion:Z products were featured on several radio broadcasts from the show. H2 Golf Company Operations Alison Hollister spoke live on "Those Guys Radio" as well as on "Talking Sports" with Randy Harris who is doing a national give-away promotion with the Colantotte Trion:Z Flex Wrstiband. Many media members stopped by the booth requesting media packages that included a Colantotte Trion:Z product samples and an all inclusive media Kit featuring press releases announcing new products such as the Boost Wristband and an image library.

From an operating stand point, states H2 Golf Company Operations, Alison Hollister, "It was great to see the excitement from our dealers when they found out that H2Golf Company was now the official U.S. distributor of Colantotte Trion:Z. Many retailers were pleasantly surprised at the ease and efficiency of creating an account with H2 Golf Company and that by doing so; they now had access to ordering all the official brands represented by H2 Golf company as a whole. Many customers referred to H2 Golf Company as their new 'one stop shop' for purchasing golf accessories for their shops."

The H2 Golf booth was filled with a variety of Golf accessories and brands including: Colantotte Trion:Z, Champ Spikes, Eco Golf, Croc's Golf, and Star Grips, in additional to several H2 Golf company branded items. The CO Vault Collection, by Colantotte Trion:Z, received much praise; the highlight was the Colantotte MagTitan NEO Legend. This elegantly designed bracelet delivers an element of comfort and functionality. Embellished with a surface of sleek carbon fiber design and polished pure titanium, the Neo Legend epitomizes the essence of fashion and striking craftsmanship that is ideal for casual and business attire alike.

H2 Golf Company has experienced tremendous growth within the last two years. As a whole, the company has become a leading and predominate name in the golf accessories industry. In addition to their own products, H2 Golf Company represents several golf companies including: Croc's Golf, Champ Golf Spikes, and Star Grips and Eco Golf.

H2 Golf lifestyle inspired products are worn by hundreds of professional athletes including those in Triathlon Sports, Cycling, Baseball, Football, Basketball, NASCAR, Tennis, and Volleyball. Over 250 professionals on the PGA TOUR, LPGA Tour, and Champions Tour have worn Trion:Z necklaces and bracelets.