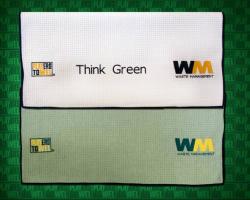 The tournament, which is played annually at TPC Scottsdale, attracts one of the largest galleries in golf and this year was no exception with more than 525,000 spectators for the week and outnumbering the 2012 crowds by 7,559.

"I would like to congratulate the winner of the Waste Management Phoenix Open on his 41st Tour victory and for carrying our towel since 2009," said Patrick Le Vine, founder of the Players Towel. "By shooting 28-under-par and holding off a tough challenger coming down the final stretch, the winner proved once again to be the champion and gentleman we all know and admire."

In the past two years alone Players Towel has proudly served the winners of 42 PGA and LPGA tournaments. Also, since 2010, Players Towel has celebrated wins at two PGA Championships, three U.S. Opens and two Masters.

Players Towels are sold on line at www.playerstowels.com and at leading pro-shops and resorts around the world.