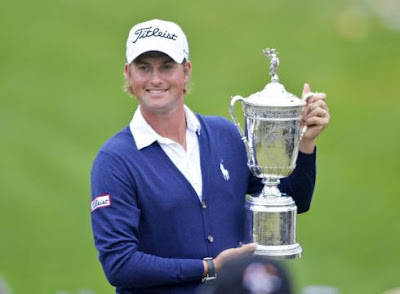 (Fairhaven, MA) - Nothing tests a player’s mettle more than Sunday afternoon at a major championship.  Titleist Brand Ambassador Webb Simpson rose to the occasion with a defining performance at the U.S. Open, elevating his game to the next level on golf’s biggest stage.  Trusting the Pro V1x golf ball and a bag full of Titleist equipment, Simpson earned his place in golf history, capturing his first major title at the demanding Olympic Club.

Simpson, who was six strokes behind the leader and tied for 29th heading into the weekend, closed with consecutive two-under par 68s on the weekend to post a one-over par 281 victory total.  His dramatic one-shot win is the third of Simpson's career, and vaults him to No. 5 in the Official World Golf Ranking.

Simpson finished one shot clear of two players, including Pro V1 loyalist Michael Thompson, who shot a Sunday-best three-under par 67.  Thompson also fired the lowest round of the tournament with a four-under par 66 on Thursday.

There were many top shots at the U.S. Open, but none more exciting than those by Titleist Brand Ambassadors Nick Watney and John Peterson.  Watney, playing a Pro V1x golf ball and an AP2 5-iron from 190 yards, converted the third double eagle in U.S. Open history with a 2 on the par-5 17th hole on Friday.  On Saturday, playing in the final group, Peterson aced the par 3, 180-yard 13th relying upon a Pro V1x and Titleist MB 7-iron.  It was the only hole-in-one of the tournament and the first of his career.

EUROPEAN: Darren Fichardt withstood high winds at the Saint-Omer Open to claim his third career European Tour title.  Fichardt started the final round with a five-shot lead, and his 5-under 279 victory total was three shots clear of runner-up Gary Lockerbie (Pro V1x), and four better than Simon Wakefield (Pro V1x).  The three Pro V1x golf ball loyalists were the only players to finish under par for the tournament.  Fichardt's previous two victories came at the 2001 Sao Paulo Brazil Open and the 2003 Qatar Masters.

Titleist was the golf ball choice of 100 of the 144 players (69%) in the field, nearly three times the nearest competitor with 34.

ASIAN:  Thaworn Wiratchant (Pro V1x) of Thailand captured the Queen's Cup in his home country to secure his record tying 13th career crown on the Asian Tour.  The 45-year-old Wiratchant won the event in style with an eagle on the par-5 final hole to close with a 3-under par 68.  His 7-under par 277 victory total was three shots better than 2011 Order of Merit winner Juvic Pagunsan (Pro V1x) and Rahman Siddikur (Pro V1x).

Titleist golf ball loyalists accounted for 90 players (63%) in the field of 144, more than three times the nearest competitor with 26.  Each of the top five finishers relied upon Titleist golf balls for their success.  Titleist was also the top choice of more players in iron sets (36) and wedges (109).