(San Jose, CA) - Tournament Chairperson Kathy Kolder has announced that Mr. Ken Venturi will be the Honoree of this year's Frys.com Open at CordeValle in San Martin, CA. This Silicon Valley-based PGA TOUR tournament is October 10-14. 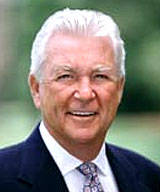 Best-known for winning the 1964 U.S. Open Championship at Congressional C.C. and for
being the popular lead analyst on CBS golf telecasts for more than three decades, Venturi is a legend. His Open victory came in sweltering heat during a Saturday, 36-hole final. The next year the USGA changed its format to one round per day, with a Sunday conclusion. He was named PGA Player of the Year and Sports Illustrated Athlete of the Year.

Though his playing career was shortened due to hand injuries, he won 14 PGA tournaments with the last victory in the Lucky International at his beloved Harding Park in 1966. Prior to the 2012 U.S. Open at the Olympic Club, Venturi was featured on the Golf Channel in a fascinating interview with David Feherty.

"I am delighted to return to the Bay Area for the Fry's tournament at CordeValle, as the region has always been considered home to me," said Venturi, a San Francisco native and an honorary member at CordeValle. "I have many fond memories of the area and look forward to seeing players compete and friends in the gallery. The thought of being a part of the Frys.com Open which benefits so many deserving charities is heartwarming." Ken and his wife Kathleen now reside in Rancho Mirage, Calif.

Launched in 2006, the Frys.com Open is an official PGA TOUR tournament benefiting many worthwhile charities. The title sponsor is Fry's Electronics, a privately owned retailer with 34 nationwide locations headquartered in San Jose, Calif. Information about the tournament is available on www.frysopengolf.com.