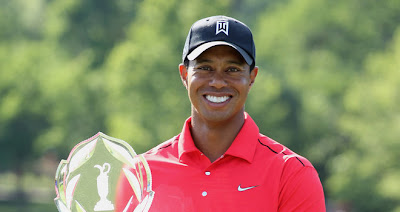 (BEAVERTON, Ore.) - Tiger Woods strode to another of his electrifying victories while wearing the highly anticipated Nike FREE-inspired TW ’13 shoes that will be available at retail in just five days.  His 73rd PGA Tour victory tied Jack Nicklaus’ career total at the Nicklaus hosted Memorial Tournament -- on the same weekend that the Nike Golf ad for the Tiger-inspired shoe aired for the first time.

With 14 Nike clubs in his bag, Woods’ ball striking was a key to his success.  Using Nike VR Pro Blades, Woods led the field in greens in regulation with 53 of 72. Woods also demonstrated accuracy off the tee utilizing products from the Nike VR franchise, including his VR Tour driver, VR Pro LE fairway wood and VR Pro Blades.  Woods finished T14 in driving accuracy, hitting 13 of 14 fairways in the final round.

“Every shot was exactly the shape, the trajectory, the distance control,” said Woods. “I had it all today, shape off tees, whatever club I wanted to hit, I could hit. That was fun to have it when I needed it.”

No doubt, the highlight of his final round was a challenging chip shot that he was faced with on the par-3 16th hole.  After he magically holed out for birdie with his Nike VR Pro 60-degree wedge, the vintage “Tiger roar” erupted.

With a one-shot lead going into the 18th hole, Woods ignited yet another “Tiger roar” after sinking a 10-foot putt for birdie with his Nike Method 001 putter. Soon after, he was hoisting the trophy.