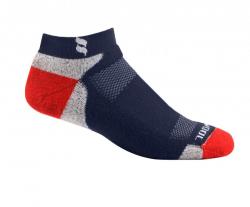 Offered through July 15 and slated to be worn during the U.S. Open by 2012 Master's champion Bubba Watson, the socks ($19.95) feature a navy base with red and white accents. From each sale, $5 will be donated to support Pendleton Place, which provides abused and neglected children with shelter and care in a nurturing environment.

Working with the "Bubba & Friends Drive to a Million," KENTWOOL will help the organization reach its goal of raising $1 million for charity through Watson's own efforts and the support of his partners and sponsors.

"Bubba is one of the most committed guys on Tour when it comes to raising money in support of worthy causes," says Mark Kent. "He's such a great ambassador and joining forces to raise money for a tremendous charity is something that means a lot to me and the KENTWOOL family."

Currently No. 4 in the Official World Golf Ranking, Watson shot to worldwide fame following his historic playoff victory at Augusta National. Since joining the PGA Tour in 2006, the long-hitting Floridian has won three other titles, including the 2010 Travelers Championship, 2011 Farmers Insurance Open and Zurich Classic of New Orleans.

"KENTWOOL offers an amazing, American-made product that keeps my feet feeling great all the time," says Watson. "I love rocking these socks and, with the support of my fans, am excited to help make a difference in the lives of some really deserving kids."

Crafted from a proprietary blend of fine merino wool and high-tech fibers for superior moisture management, the socks come with a 100 percent blister-free guarantee. Featuring WINDspun technology that infuses the fibers with air, KENTWOOL Golf Socks have an innovative, micro-climate system that wick moisture and provide superior odor control. This creates unrivaled cushioning at micro-stress points along the foot, enhancing comfort and energy levels while reducing injury risk.

Retailing from $19.95 to $24.95, KENTWOOL golf socks are available in the ankle-length Tour and Low Profile models for both genders and mid-calf Tour Standard crafted exclusively for men.