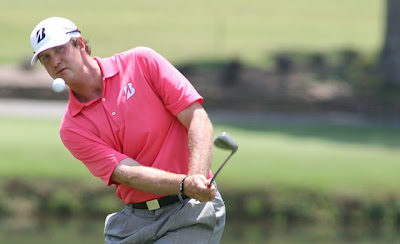 Nationwide Tour Rookie Uses Bridgestone Dual Dimple Technology to Blister the Field in Sunday Record Round
(ATHENS, GEORGIA) – Former University of Georgia All-American and current Bridgestone Tour Team member Hudson Swafford seems to share the same flair for the dramatic that fellow Bridgestone staffer and former SEC standout Brandt Snedeker does.  Completing a comeback that was “Snedeker-esque”, Swafford relied on his new Bridgestone Tour B330 golf ball to fire a final round, course-record 9-under par 62 to seal his first ever Nationwide Tour title.

The improbable come from behind victory was capped off by a holed bunker shot on the 72nd hole, for a tournament best 17-under par total.  The fact that the 1-shot victory came at the Stadion Classic at UGA, contested on Swafford’s collegiate home course, only added to the drama.

The enhanced distance and precision of the new Bridgestone TOUR B330 ball was on full display this weekend as Swafford finished the tournament 4th in Driving Distance, averaging a stout 323 yards per drive.  In addition, Swafford led the field in Birdies (25) and finished T7 in Greens-in-Regulation hitting nearly 81% of greens for the week.

Bridgestone’s new TOUR B330 ball features the company’s proprietary Dual Dimple Technology cover for optimized aerodynamic performance. The cover’s smaller inner dimples increase thrust power at launch for greater distance while the larger outer dimples promote a shallow angle of descent for increased roll out on landing. The result of the improved performance at both takeoff and landing is greater overall distance performance and more consistency in flight.

Swafford earned $99,000 for the win and vaulted himself into the 7th position on the 2012 Nationwide Tour Money List.  In addition to playing the new TOUR B330, Swafford also wears a Bridgestone hat and glove and carries a Bridgestone Golf staff bag in competition.  For information on the entire 2012 Bridgestone Golf Tour Team, visit www.bridgestonegolf.com.