(Franklin, TN) - Six different players using SeeMore putters have deposited nearly $2.2 million in the bank over the last five weeks on the PGA Tour. The highlight has been three 2nd place finishes, including the RBC Heritage, the Wells Fargo Championship, and the Players Championship. The run has been truly amazing with these six players making a combined 12 of 14 cuts at an 86% rate. In fact this averages out to these players using SeeMore on average earning $157,000 per start over this five-week stretch. 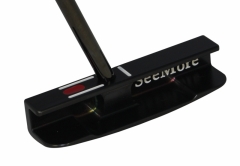 These players see what a proven and consistent putting system can do for their putting. The ability to know what you are doing for every putt is the secret to putting and a SeeMore putter gives you that secret. A SeeMore putter gives a consistent set-up every single putt. The ability to repeat the same starting point in putting is key. It is like shooting a free throw shot in basketball. Better fundamentals at set up and consistent form throughout will lead to a higher shooting percentage. SeeMore is the same way.

"SeeMore has been working on the roll out of the SPi idea for several years now, and in fact had a soft launch of the program during 2011 with a global team of instructors, where we really ironed this out to be a program that first and foremost worked for the needs of the hundreds of teaching instructors who told us they had a real void when it came to putting instruction," stated Jim Grundberg, SeeMore's CEO. "It is based on the teachings of our key global teaching and tour instructors, and the input of many of the tour players they work with, which have used SeeMore putters and the SeeMore system for years to improve putting performance in practice and in play on all tours."

Becoming SPi Certified will help golf teachers formulate a complete teaching plan to help their existing students and recruit new students to become great putters using the SeeMore system that has won 2 Major Championships and set numerous putting records on the PGA Tour. It is a complete game plan, which will give any golf instructor a new level of confidence in the proper teaching and fitting involved in putting instruction. Becoming certified to teach the system initially consists of online training and personal coaching. For more interest, contact Ted@SeeMore.com.