(CARLSBAD, Calif.) - Callaway Golf Company's RAZR Fit Driver arrived on the scene this year in thunderous fashion by capturing Golf Digest's 2012 Editor's Choice Award and then powering Phil Mickelson to victory over an elite field at the AT&T Pebble Beach National Pro-Am. Since then, the company's flagship product for 2012 has been proving to everyday golfers as well as those who compete against the world's best that Callaway's first fully adjustable driver was worth the wait.

Casting aside ballyhooed rhetoric and prodigious distance gain claims, Callaway took RAZR Fit straight to the people and kicked off the Real Results Project, an interactive venture housed at CallawayGolf.com/RealResults. This multimedia platform aggregates real performance data from ordinary golfers and tour professionals, along with genuine reaction videos from the participants. The Real Results Project encourages golfers to discover their potential by testing RAZR Fit against any club on the market at Callaway Demo Day events as well as Dick's Sporting Goods locations across the country that feature data capturing launch monitors. 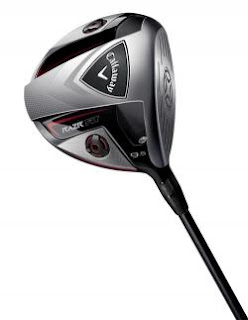 The Real Results Project is part of Callaway's effort to prove that the RAZR Fit driver is longer and more accurate than any other driver in the market. With an adjustable hosel that allows for open, square and closed face settings-as well as movable weights in the sole that promote neutral or draw ball flight characteristics-the RAZR Fit has found a home in the bags of a number of top professionals, including Mickelson and Ernie Els.

And it's not just amateur players who are experiencing better overall driving statistics with the RAZR Fit. Nearly every Callaway Staff Professional on the PGA Tour has seen significant improvement in his driving proficiency since switching to the RAZR Fit for the 2012 season. Longtime PGA Tour Professional Jim Furyk, who finished 18th in Driving Accuracy on the PGA Tour in 2011, switched to the RAZR Fit for the 2012 season and has risen to No. 3 in that category through the Byron Nelson Championship. Ernie Els has improved his ranking in Total Driving, going from 162nd in 2011 to tied for 33rd in 2012 with the RAZR Fit. Fellow South African Trevor Immelman put the RAZR Fit in his bag this year and has gone from a tie for 134th in Total Driving in 2011 to 27th in 2012. And finally, Colt Knost has jumped into ninth place in Driving Accuracy with the RAZR Fit in his bag this season after ranking 42nd in that category in 2011.

Mickelson (PGA Tour), Alvaro Quiros (European Tour) and Luke List (Nationwide Tour) have already won tournaments using a RAZR Fit driver. List's first professional victory was particularly impressive due to the fact that he averaged an unbelievable 329 yards off the tee over four rounds with the RAZR Fit and the new Callaway HEX Black Tour golf ball. Quiros' aforementioned European Tour victory also featured an average driving distance of greater than 300 yards for the tournament. The impressive results achieved over the last several months also stretch to the LPGA Tour as the RAZR Fit driver was in the hands of this year's first major, the Kraft Nabisco Championship.

The RAZR Fit driver is currently available for all golfers for $399. In addition, Callaway recently launched udesign by Callaway, an online customization tool that gives golfers the unprecedented ability to personalize their own version of the RAZR Fit driver. By visiting CallawayGolf.com/udesign, golfers can select their own color choices on the clubhead and grip, as well as a myriad of shaft model and other custom configurations. The udesign by Callaway personalization and customization features an additional fee of $50. Certain after-market shaft and grip choices may entail additional costs.

A Tour Authentic version of the RAZR Fit, featuring an even greater level of adjustability in the hosel and additional movable weight offerings to dial in the center of gravity and ball flight characteristics, is available for $499.

For specific information regarding the RAZR Fit Driver, visit www.callawaygolf.com/razrfitdriver.