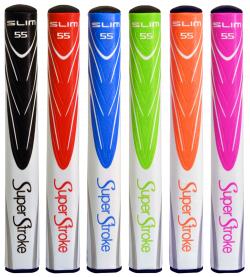 Jason Dufner came to the TPC Four Seasons Resort just a few weeks removed from his first PGA Tour win at the Zurich Classic and walked away with his second PGA Tour victory at the Byron Nelson. Arguably the hottest golfer in the world, Dufner came to the 18th hole needing birdie to win. Using his SuperStroke Slim Lite putter grip, Jason calmly made a 25 ft. putt for the win. This victory took Dufner to 14th in the world rankings and 1st in the FedEx cup race.

"I feel comfortable on the golf course when I'm out there," Dufner said after his win. "I feel like I'm in good control of my game, getting better emotionally with dealing with the pressures of trying to win out here."

SuperStroke jumbo putter grips were also played by two other top 10 finishers and took five top 25's overall. Each of the five SuperStroke grip models were in play this week from the UltraSlim to the Slim Lite belly grip, the world's first over-sized belly offering.

With three wins in the past four weeks, SuperStroke putter grips have been in the hands of the world's best players and have provided top-notch results. SuperStroke grips have now won $13 million on TOUR and counting.