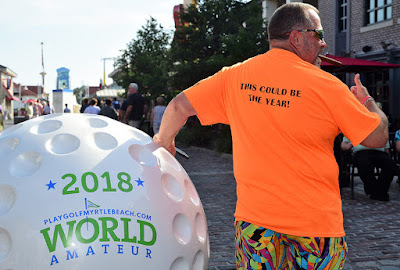 (Myrtle Beach, S.C.) – Nearly 3,200 golfers from 49 states and 26 countries teed off under sunny skies Monday morning in the first round of the PlayGolfMyrtleBeach.com World Amateur Handicap Championship.

A 72-hole, net stroke play event, golfers were placed into tightly grouped flights based on age, gender and their handicap index. After 72 holes of competition, all flight winners and ties will advance to Friday’s Flight Winner’s Playoff at Barefoot Resort’s Dye Club, an 18-shootout that will crown the 2018 World Champion.

There are 66 flights in this year’s tournament and 33 Myrtle Beach golf courses are hosting tournament play each day. By the time the tournament is complete, 55 area courses will have hosted at least one round of the World Am.

“This is the 35th annual PlayGolfMyrtleBeach.com World Amateur Handicap Championship and we have 3,188 players from across America and the world coming to Myrtle Beach to participate - that’s an incredible number,” tournament director Scott Tomasello said. “Our goal, as it is every year, is to provide our players an experience, on and off the course, that leaves them looking forward to next year.”

As appealing as the competition is, it’s only half the fun at the World Am. Each night players gather at the World’s Largest 19th Hole, which consumes all 120,000-square-feet of the Myrtle Beach Convention Center.

Tournament players and a guest enjoy free food and drinks, a 70-exhibitor golf expo, live entertainment, demo areas, celebrity appearances and more. The World’s Largest 19th Hole also features a jumbotron that displays the scores from each flight, allowing players to see their name on the leaderboard.

Golf Channel’s popular Morning Drive program will provide live coverage of the tournament on Thursday and Friday mornings, giving viewers an up close look at the event and the World Championship Playoff.

The PlayGolfMyrtleBeach.com World Amateur Handicap Championship, the world’s largest single site tournament, is a Golf Tourism Solutions event.
Posted by Blogger at 10:43 AM