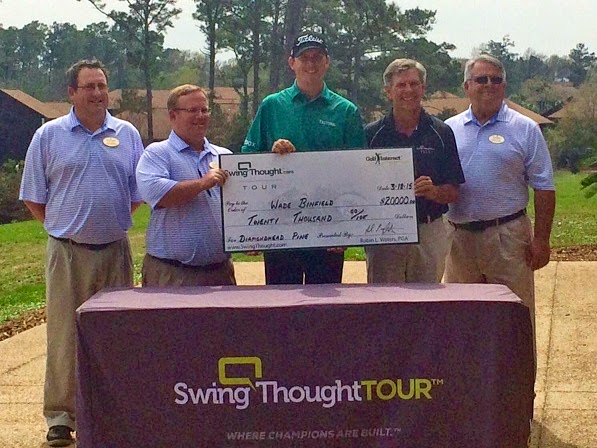 (Diamondhead, Miss.) – When Wade Binfield missed the cut at the 2014 Web.com Tour BMW Charity Pro-Am Championship presented by SYNNEX Corporation, even after playing all three courses under par total, he knew he had the game to be competing final day in the number two tour’s championship Greenville, S.C. event. And why wouldn’t he when he saw three 2013 SwingThought Tour members, 2012 co-Rookie of the Year Jonathan Randolph, 2013 Player of the Year Jon Curran, and 2013 Rookie of the Year Blayne Barber, finish 2nd and tied for third respectively.

The BMW Charity Pro-Am Championship helped propel all three past SwingThought Tour members onto PGA TOUR careers and now, thanks to his victory in the SwingThought Tour’s Pine Classic at Diamondhead (Mississippi) Country Club, Binfield is hoping to follow the same path.

You see, not only did former All-American out of Clayton State take home the $20,000 1st place check for his victory at Diamondhead, he also earned an exemption into the May 14th through 17th BMW Charity Pro-Am Championship with the win. Binfield is definitely looking forward to a return trip to the event and an opportunity to redeem himself, however he will also will be looking to repeat what many SwingThought Tour alums have done in the past, most recently by recent Web.com Tour Brasil Open winner Peter Malnati.

In 2013 Malnati started as a member on the SwingThought Tour (formerly the NGA/Hooters Tour) and went on to win the Web.com Tour News Sentinel Open in the same year, thus earning status onto the PGA TOUR for the following year. Two-time ST Tour Player of the Year Ted Potter Jr accomplished the feat in 2011 and fellow alum Robert Streb, who currently sits 5th in the FedExCup Points Standing, accomplished the feat in 2012.

Binfield started the final round tied for the lead with the previous week’s Cardinal Classic runner-up James Erkenbeck at 11 under par. He would start the day shooting 5 under par on the front nine and looking like he would cruise to his first SwingThought Tour win.

With Erkenbeck playing the front 9 at 2 under par, Binfield would start the final 9 with a 3 shot lead. Both players would play the back nine at even par heading into 18 where the former New Mexico standout, Erkenbeck, would par and Binfiled would bogey, good enough for a two shot victory.

Binfield played the front nine on the Pine at 15 under for the three days. Oklahoma State alum Talor Gooch, who shot 64 to lead after the opening round, shot rounds of 71 & 69 to finish in solo third. Former Auburn star and 2013 SwingThought Tour Rookie of the Year runner-up Will McCurdy finished with rounds of 65 & 66 to finish in a tie for 3rd with Virginia Commonwealth alum Lanto Griffin.

Georgia alum Joey Garber, who shot a 2nd round 64 to put himself into Wednesday’s final pairing, shot a final round even par to finish tied for 6th with Virginia alum Bruce Woodall and Kent State alum Mackenzie Hughes. Former Georgia Tech All-American James White Jr, who was just a shot off the lead heading into Wednesday’s final round, finished tied 9th with past Web.com Tour members and SwingThought Tour winners Mark Blakefield out of the University of Kentucky and Reid Edstrom from Auburn University. Mississippi State’s Chad Ramey shot a final round 64 (the low score of the tournament each day) to jump 31 spots to tied 16th, the biggest move of the day.

Binfield earned $20,000 and an exemption into the 2015 BMW Charity Pro-Am Championship presented by SYNNEX Corporation with the win. Erkenbeck earned $9,995 for runner up while Gooch earned $7,995 for third. Lanto Griffin and 2013 Rookie of the Year runner-up Will McCurdy each earned $6,295 for finishing tied 4th. Altogether 56 players made the cut and shared the $140,000 purse.