(BALTIMORE, MD) - STX Golf, world-renowned as an industry pioneer in putter innovation with its patented Soft Face Insert Technology, announced that the company has launched its Fall Facebook promotion. 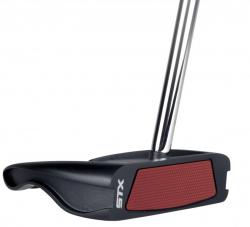 According to STX Director of Golf Steve Henneman, "We will be giving away PGA Tour and Web.com proven Sync Series Putters to three lucky winners. Our goal is to have the winners experience firsthand the benefits of our putters and at the same time grow the brand though Facebook."

The STX Golf Fall Facebook promotion is easy to participate in. Simply visit the STX Golf Facebook page and click on the "Contest" icon which will forward the site to the registration form. Fill the information out accordingly and click - submit. It is that easy.

The randomly selected winners will be notified on Halloween, October 31st which marks the end of the Fall Facebook promotion.

The STX Sync Series has been used on the PGA Tour for decades and has been used to capture 12 PGA Tour events but is relatively new on the Web.com Tour. It was introduced this spring. In this short period of time, the Sync Series has been played to close six Top-10 finishes, including a second place finish at the WNB Classic and a third place finish at the Rex Hospital Open, one stroke behind the champion.

The original Sync Tour Pro now named the STX SS1 Putter has been credited with many PGA Tour victories including a PGA Championship. The STX signature bullet back design puts weight directly behind the sweet spot which is proven to keep any stroke on line and provide unprecedented balance and feel.

The award winning STX SS2 Putter resembles its predecessor, the Sync Tour Mallet. It is a contemporary mallet that features the signature STX bullet back design which is an element that the PGA Tour Professionals credit to its incredible balance.

The STX SS3 Putter is a contemporary blade putter that gracefully blends alignment aids with soft curves. This toe down or toe weighted model is heel shafted with a step-less shaft for those golfers with an arching stroke.

For the golfer who prefers a more traditional blade, the STX SS4 Putter will inspire their putting. It is visually appealing, particularly at address. To keep the hands forward during the entire putting stroke, the STX SS4 features heel-toe weighting with a plumbers neck hosel.

A flare neck hosel that seamlessly connects the head and shaft makes the SS5 Putter a true standout. This traditionally styled and inspired blade has been designed to slightly keep your hands forward during the stroke and as with the other Sync Series blade putters, the SS5 is toe weighted for those golfers with an arching putting stroke.

The STX SS6 Putter is a contemporary blade with an elegant exterior pad line and flange which creates a uniquely shaped head. Additional weighting has been precisely distributed to provide head stability at impact for greater accuracy. This heel shafted putter keeps the hands forward during the entire putting stroke.

The SS7 Putter features a heavier head with perimeter weighting, perfectly suited for both belly and long length putters. Its wing-like sections add balance with weight. These segments are also designed for an easy, non-drag take away. Optic openings aid with alignment as well as weight distribution.

The STX entire line of Sync Series is equipped with "F.E.E.L" technology (Friction Enhancing Elastomer Layer) inserts. This patented STX technology dramatically increases the coefficient of friction to put a greater amount of topspin on the ball and keeps the putt on line. The Soft Face Insert Keeps the ball in contact with the putter longer to also provide superior directional control decreased ball skid and reduced ball deformation.