(Boulder, CO) - Scott Salzman, inventor of the three-in-one Spotless Swing Golf Towel, and president of BrightSpot Solutions announced that their innovative towels are now in stock and available at select Golfsmith stores. 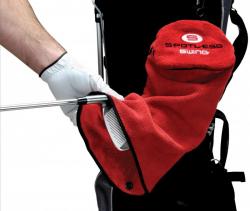 "We did a test run on Golfsmith.com and the sales were quickly successful. Golfsmith has now expanded the number of stores carrying Spotless Swing to 33 stores," said Salzman.

The revolutionary new Spotless Swing Golf Towel was introduced in January at the 2010 PGA Merchandise Show is now taking the golf accessories market by storm. It is being called the new "standard" in golf towels by industry insiders.

To view a list of Golfsmith stores which carry Spotless Swing, visit the store locator page at: www.spotlessswing.com/store_locator.

\Until Spotless Swing was developed, the only way to clean the mud and dirt off your golf clubs during your round was to water down a standard towel or use a brush. However, brushes are awkward and messy and a watered down towel dries out during your round rendering it useless.

Now there is an alternative. A portion of the inside of the Premium Multi-Use Spotless Swing Golf Towel is made of a uniquely designed MicroBrush fabric that easily cleans the grooves of the club-face where dirt hides from ordinary towels. The fabric is coarse enough to clean deeply into the grooves yet soft enough to not damage the golf club finish, and absolutely no water is needed. The ultra-high quality microfiber fabric that makes up main body of the Spotless Swing absorbs over 600% of its weight in dirt, mud and water.

The Spotless Swing Golf Towel functions as three golf towels in one:
1. Outside keeps the hands, face, glove and grips clean and dry;
2. Inside protects and preserves golf clubs by removing dirt, mud and water;
3. Revolutionary MicroBrush fabric cleans club grooves effortlessly preparing the club for its next shot.

The Spotless Swing is available in five colors: Black (with red trim), red (with black trim), solid black, pink and white. The golf towel conveniently attaches to any golf bag with the included carabineer clip.