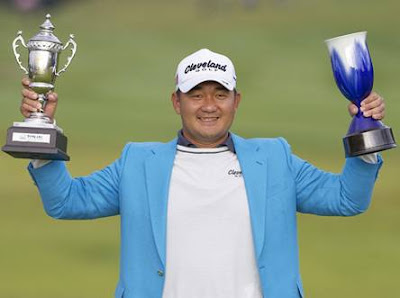 Han Lee, who is contracted with Dunlop Sports, won his first event at the “MyNavi ABC Championship Golf Tournament” on the Japan Tour. The event was held at ABC Golf Club in Hyogo Prefecture October 25-28.

Han started out tied for 10th, five strokes behind the leader on the last round and, despite the adverse weather condition, was the only player playing a superb round. He earned nine birdies and carded a 63. He was surprised with his own birdie approach shot on the eighth hole and his long 12-meter putt on the 14th hole.

With this win, he earned a spot in the World Golf Championship – HSBC Champion starting
November 1.