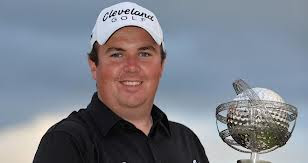 Lowry, a 25-year-old Irishman, started the final round four shots off the lead at Oceanico Victoria Golf Course in Vilamoura, Portugal. Lowry’s solid play, which included a holed approach for eagle on the par-4 11th hole, helped him close with a 5-under-par 66 and a 14-under total of 270. The victory was Lowry’s second on the European Tour, his first coming as an amateur at the 2009 Irish Open.