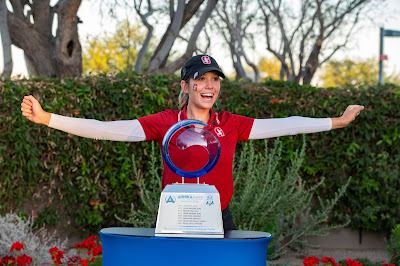 (SCOTTSDALE, Ariz.) – Stanford Freshman Rachel Heck continues to re-write the record books in college golf by becoming the second Freshman to win the prestigious ANNIKA Award presented by Stifel, recognizing the most outstanding female NCAA DI college golfer. The announcement was made today by Hall-of-Famer Annika Sorenstam and Ron Kruszewski, Chairman and CEO of Stifel on GOLF Channel.

As a result of winning the 2021 ANNIKA Award, Heck receives an exemption to compete in the 2022 Amundi Evian Championship, one of the LPGA Tour’s five major championships.

“Every time someone asks my who is my favorite golfer and who is my biggest role model, Annika is the easiest answer,” said Heck after receiving the award and a congratulatory phone call from Annika. “She is incredible. What she did with her career in golf alone speaks for itself, but what she has done after that is unbelievable. She has given so much back to the game. After she finished her career, she has spent the rest of her life just giving back to the game, growing golf and growing girls golf. So, to receive the award from her is so special.

“A huge thank you to all of the coaches and especially the players for voting,” continued Heck. “These are my best friends. These are girls I grew up playing with, and to get their vote is really special. They are the reason I come out here, want to play and are the reason why I love golf so much. To win an award voted on by them means the world to me.”

“It makes me super proud and warms my heart when I hear her comments,” said Annika after hearing Heck’s interview on GOLF Channel. “I’ve seen her play the last few years and I have seen her grow up and mature. I think golf is in good hands when you have players like Rachel. It validates what we do. It makes me want to do more and celebrate these wonderful young women and what they do both on and off the golf course.

“She has had an amazing season, and I think it says a lot about not only her performance on the course but a lot about her personality,” continued Annika. “Thank you to Haskins Commission and Stifel in presenting this award. It is very special for us. This is the eighth year, and every year we have had some incredible winners, many who have gone on to great success on the LPGA Tour and are great ambassadors for the game.”

“Stifel has been a proud supporter of college golf for more than a decade, and our commitment grows stronger each year,” said Ron Kruszewski, Chairman and CEO of Stifel. “As an organization with an abundance of top women performers, we are honored to be a presenting sponsor for such a prestigious award. This year’s recipient has gracefully handled the challenges of a very unconventional golf season and we salute her remarkable resilience and achievements.”

Heck, the 2nd ranked player in the country on GolfStat and the 6th ranked player in the Women’s World Amateur Golf Rankings, enrolled in the Air Force ROTC this semester, with her ultimate goal of becoming the first woman to serve in the military reserves while playing on the LPGA Tour. She will compete next week in the U.S. Women’s Open at The Olympic Club after earning low medalist honors at the Marin Country Club qualifier in early May.

Prior to teeing off in her final round at the NCAA Women’s Individual Golf Championship on Monday, Heck paused after she heard the name Victoria Pinckney by the first tee starter. Every player in the field at the championship on Monday played in memory of a fallen U.S. serviceman or servicewoman. Air Force captain Pickney – a wife and mother – passed away serving her country in Krygyzstan during Operation Enduing Freedom eight years ago. Heck walked over the starter to write down Pinckney’s name on her scorecard.

“We’re playing a golf tournament; that doesn’t matter,” Heck told GOLF Channel following her individual championship victory. “These people gave their lives for this country, so I didn’t want to lose sight of that. When I missed a putt that I thought was going in and looked down at my scorecard and saw her name, it kind of brought me back to real life and reminded me of what’s important.”