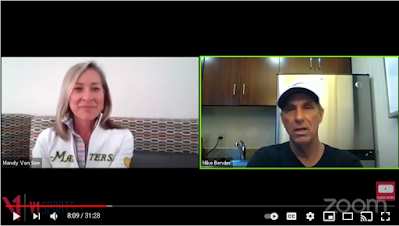 (VIDEO) — Do you ever wish you had the chance to pick the brain of a top instructor who works side-by-side with the best players in the game? Earlier this week, some avid golfers had that opportunity when perennial top-five-ranked PGA teaching professional and director of instruction at The Mike Bender Golf Academy at Magnolia Plantation Golf Club (Lake Mary, Florida) Mike Bender sat down for a Q and A with V1 Sports’ Mandy Von See, host of “Tuesday Traces.”

In this fun conversation, the 2009 PGA of America National Teacher of the Year revealed some great instructional insight, some stories from around Augusta National Golf Club’s grounds during this Masters week and some great tales from his travels with 2007 Masters Champion Zach Johnson.

Bender has been on site at Augusta National Golf Club all week helping Johnson prepare to play in the season’s first major. Here are just a few of the topics he and Von See covered – with the help of viewer questions – in this engaging, informative conversation:

What would an amateur who average scores around 80 shoot from 6,800+ yards at Augusta National Golf Club, under Masters tournament conditions?

Would you go for the green on #3 at Augusta with driver?

Am I me, or Bryson DeChambeau? I think you do if the pin is in the front of the green. That way, you can drive the green or drive it over the green. It's probably an easier way to make birdie versus trying to hit that little front pin placement over on the left hand side. The other day in a practice round, Zach was 30 yards short, So, a 30-yard short to a back pin location is pretty good. To a front pin location, it's no good. So, it depends on how far you can hit.

Do you go for the back-right pin location on #12 on Sunday?

Where do you prefer to see a golfer’s weight in the putting stroke?

I like players that have more weight on their left side. Primarily, it's so there isn't any transfer of weight during the stroke. Favoring the left side and keeping the weight, consistent, you can minimize any lower body motion and you can have a little bit more of a pure stroke with your shoulders, as opposed to having any kind of movement in the lower body.

How do you coach your players to deal with the nerves on the opening shot?

I will tell you a funny story. Back in the day, I remember Zach Johnson playing in (The Memorial Tournament) at Muirfield Village and tee times came out and he said he called his wife and he said, "Guess who we're playing with?" and she said "Tiger Woods?" He says, "No, bigger than that." After this long silence, she suddenly realizes it's Jack Nicklaus. Zach was paired with Jack Nicklaus at his own tournament, and they had like a 12 o'clock tee time with 10,000 people around the first tee. So anyway, I called Zach on Thursday night and asked, "How was that opening tee shot?" He said he was so nervous he couldn't swallow a BB. He said, "Well, I knew I couldn't pass. I had to play, so I visualized great shots I've had in the past, and I ran my routine." I striped it right down the middle. Everybody gets nervous but the players, you know, they stick to the routine and they're OK. They've hit so many great shots under pressure and so forth and they're off to a great start.

What is the key to hitting irons consistently?

Everything comes down to the proper delivery of the club into the ball. You could say anybody who's very consistent in golf is delivering the club the same way into the ball. Being able to hit down on your shots and compress the ball - which helps to stabilize the clubface - and controlling that clubface is another key component to hitting good iron shots. I try to make sure people come in on the correct plane because that helps them produce more lag. Lag helps to get your hands more forward. That, in turn, helps you get down on the ball, so it's kind of a domino effect. I definitely want to hit down on the ball and control the clubface.

What one drill would you do to get a consistent downswing?

I look at things like one domino falling against the other and they run down the list. So many times, I see people with so much tension in their shoulders and their forearms and they start their downswing more with their upper body, and they start rotating a little early and that's where they can shift the plane and come in and have all kinds of different release habits. If that's the case, I have the drills I get people to do. We work on trying to accelerate and be more relaxed in their arms and get their hands moving toward the golf ball. We do a lot of things when we do a fold-up drill with an impact bag up against the wall that helps get people to do that. We have a handful of drills that we do to work on that particular aspect of the swing because it is such a big deal.

What are you impressions on the PXG clubs Zach Johnson uses and would you consider them for amateurs?

The PXG clubs are phenomenal. They're a great club and, obviously, they've had an evolution since they came out and they've continued to get better and better. Zach is dialed in with his equipment now he really feels confident with it. I think they're an excellent club company. All the companies these days make great clubs. The fit is the main thing. You've got to get fit properly. And that's going to come from seeing somebody who has a launch monitor that can dial in all your specs to your swing speed. Also, once your launch angles are flat, it's really important that if you do get that fit right.

How do you navigate the no-cell-phone policy to capture video on the grounds at Augusta National?

Most weeks, I use the V1 app on a mobile device. Here, I bring my own camera with a tape head and videotape swings. Then I bring it home and then I load it into my computer into my V1 Pro system. I can take it back and look at Zach’s swings from today, and put them up against other years. I’ve also got some swings of other players that I can use for teaching purposes can still do a lot of work with the V1 system out here at Augusta.