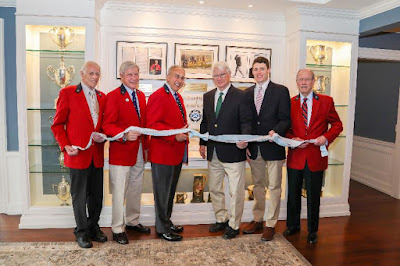 (HASTINGS-ON-HUDSON, N.Y.) – The Saint Andrew’s Golf Club – America’s oldest golf club and a founding member of the USGA – has unveiled a new exhibit documenting its unprecedented place in the game’s early history. The exhibit’s debut was marked by a ribbon-cutting ceremony held Saturday, April 17, attended by members, emblazoned in their traditional red jackets, as well as dignitaries including Archie Reid, great grandson of Club founder John Reid; Mrs. Karen Reid, and their son, John Reid. 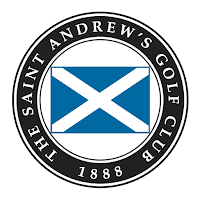 The exhibit, nearly two years in the making, features key historical documents, photographs, invitations, and more charting the Club’s early milestones, beginning in 1888 when The Saint Andrew’s Golf Club was founded in Yonkers, N.Y. (Today, the Club is in the village of Hastings-on-Hudson.) The minutes from the founding meeting, held at Reid’s home, lead off the exhibit.

On October 11, 12 and 13, 1894, the Saint Andrew’s Grey Oaks Golf Course in Yonkers played host to the first-ever U.S. National Amateur Match Play Championship. The day after that event ended, the Club again made history by hosting the first U.S. Open Championship. An original Currier & Ives print depicting the Saint Andrew’s U.S. Amateur Championship is included in the display as is the invitation to participate in the competition which was sent to golf clubs across the country in the summer of 1894.

“This marks the first time, within one formal display, that we have captured the leading role The Saint Andrew’s Golf Club played in the early history of golf,” remarked Vik Atal, Club President. “It depicts one leadership accomplishment after another throughout this most formative decade in the history of American golf.”

Bruce Clark, Chair of the Club’s Historical Committee, expounded on the role Henry O. Tallmadge, founding Secretary of the Club, played in creating a governing body for the game of golf in America. Tallmadge invited four other prominent American golf clubs—Chicago Golf Club, Newport Country Club, Shinnecock Hills Golf Club, and The Country Club of Brookline—to join with Saint Andrew’s in forming such an organization, which led to a December 1894 meeting in New York City and the birth of the United States Golf Association.

“Not only are we proud to be recognized as America’s oldest golf club and founding member of the USGA, but we are also proud of the leadership role Saint Andrew’s played in so many important ways during the formative years of the game of golf in this country,” said Clark. “The pieces we have chosen to display as part of this exhibit were carefully selected to illustrate our very rich history and contribute in a meaningful way to telling the complete story.”

That first U.S. Open Championship, conducted at match play, was won by Shinnecock Hills Professional Willie B. Dunn, who proudly wore the Saint Andrew’s U.S. Open medal throughout his lifetime, and even, it’s said, being buried with it. A photo taken of the champion wearing the medal is included in the new exhibit, courtesy of the London Scottish Club.

“We are indebted to the London Scottish Club and many other individuals and organizations who collectively helped us with the exhibit contents,” said Rick Powers, a member of the Club’s Historical Committee. “This display is the proud accomplishment of a large team of people who have worked together carefully and thoughtfully for the better part of two years.”

Located only 20 miles from New York City, The Saint Andrew's Golf Club is one of golf's venerated historical venues. Members and their guests enjoy the game in a spectacular setting and play one of the area's best-conditioned and exciting layouts—a challenging par-71 golf course redesigned by Jack Nicklaus in 1983.