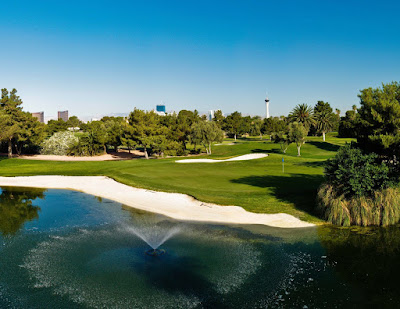 (LAS VEGAS, NV) — Las Vegas National Golf Club has enjoyed its share of big moments during its 60-year run near the most famous entertainment Strip in the world. And next week it adds another.

The Korn Ferry Tour will conduct a Monday Qualifier at LVN on April12 for its MGM Resorts Championship at Paiute Golf Club April. 15-18. A field of well over 100 professionals will battle it out for four spots. The Korn Ferry Tour is just one notch below the PGA Tour in status, so this event will feature some of the world’s best golfers.

Las Vegas National, a Bert Stamps design, is maintained by Pro Turf International, a Las Vegas-based, family owned construction, landscape and golf maintenance company with over 30 years of hands-on experience in the Southwest.

Led by Pro Turf International Director of Maintenance Jared Bumpus, the PTI team at LVN has the course in pristine condition for the qualifier.

“Las Vegas National is in top condition this time of year anyway,” said Bumpus. “But our crew has gone the extra mile the past few weeks making sure the course is at its very best for these top players.”

This iconic club, which opened in 1961 as the Stardust Country Club, has hosted many professional tour events, with such names as Jack Nicklaus, Lee Trevino and Mickey Wright claiming victories there. Las Vegas National was part of the rotation when Tiger Woods recorded his first professional victory in the 1997 Las Vegas Invitational. Tiger shot his highest round of the tournament on this course – 70.

LVN is also remembered as a favorite hangout for members of the Rat Pack back in their day. Frank Sinatra, Dean Martin, Peter Lawford, Joey Bishop and Sammy Davis Jr. gathered around the piano, entertaining guests with songs and stories following a late day match on the storied links. It is the stuff of legends during the early Las Vegas boom days.

LVN was also famous for the role it played in the 1995 movie Casino, starring Robert DeNiro, Sharon Stone and Joe Pesci. The house used in the movie sits to the left of the No. 1 tee box.

But history aside, the golf course stands the test of time all by itself.  LVN is a traditional, oasis styled golf course with thousands of trees, which places a premium on accuracy off the tee. The course features fairways that meander in the shadows of proud palm trees and elevated greens that are guarded by deep, yawning bunkers. It is truly a parkland-style layout far different from most of the golf offerings of the desert region.

The course opens and closes with a pair of challenging par 5’s, and features five par 3’s that will test your iron game. The 18th is one of the best finishing holes in Las Vegas. Appropriately named “Casino,” this risk-reward hole doglegs right around two lakes, setting up the choice of playing it safe with your second shot, or going for broke to a three-tiered, well-bunkered green.

Las Vegas National remains one of the region’s most popular courses, but there was a period during which that popularity was tested. As newer courses began popping up around town, Las Vegas National slipped into the background, and course conditions suffered. Then in 2010, ownership made what proved to be a facility-saving decision.

Pro Turf International was called in to take over all golf course maintenance aspects at Las Vegas National.

“When we took over the maintenance the course was in really bad shape,” said Bumpus. “About 50 percent of the golf course was dirt. There were a lot of problems.”

“When they took over, about the only thing that was green and growing were weeds,” said Wood. “The saying was, ‘don't spray weeds because that’s all we got.’

“Now, the course is in beautiful shape, and we’ve received a lot of positive reviews. PTI has done a great job turning it around.”

PTI continues to tackle several other projects to enhance the overall experience at Las Vegas National. The end result is this: Las Vegas National has been repositioned to the lofty heights it enjoyed in its glory days.

And on Monday April 12, some of the top golfers in the world will see just why.