(LIBERTY CORNER, N.J.) – The USGA Golf Museum has expanded its world-leading golf library and artifact collection thanks to a recent donation of more than 560 golf-themed comic books. The continued effort to preserve the stories and images of how golf has been played and portrayed through time is part of the association’s mission to champion and advance the game. 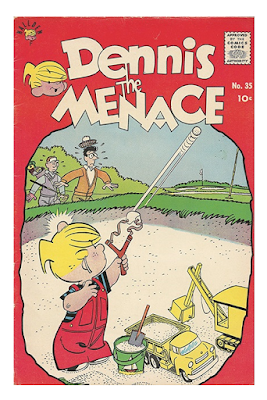 The collection, which is the most significant of its kind in the world, contains comics dating to the 1930s that feature golf on the cover. A selection of the covers has been digitized and can be found on usga.org.dennis.png

Indiana-based collectors Charlie and Sara Haviza spent more than 30 years amassing the unique collection while becoming the world’s leading authorities on the topic. The couple, who are longtime USGA Members, donated the collection to the USGA Golf Museum this spring.

Most notably, the collection includes:
- New Funnies No. 108 from 1946, the first golf cover by Walter Lantz, one of the iconic comic artists of the 20th century
- Boy Comics No. 23, a World War II era comic featuring Crimebuster, a boy superhero (1945)
- Mickey Mouse Magazine No. 9 (1934)
- Examples of every known golf cover featuring cat and mouse characters Tom and Jerry

The comics in the collection closely reflect the periods in American history in which they were published, and the evolution of individual characters over time likewise mirrors changes in society and its values. More specifically, the covers provide important perspectives on the perception of golf at the time and its role within communities.

“Beginning with the golf boom of the late 1800s, golf was featured in just about every form of artistic and cultural expression, including music, theater, film, art and literature,” said Rand Jerris, senior managing director of Public Services for the USGA. “Collections such as this provide alternative methods of storytelling that create important pathways for more people to be exposed to golf.”

The donation greatly enhances the more than 200 golf-themed comic books the USGA already held in its library collection.

The USGA Golf Museum is located on the campus of the USGA’s headquarters in Liberty Corner, N.J., with an extensive digital catalog that can be found at usga.org. The commitment to the preservation and celebration of golf history is part of the association’s mission and is funded in large part by revenue generated from the U.S. Open.
Posted by Blogger at 5:00 AM