DeChambeau Celebrates July 4th Weekend with Fireworks of His Own 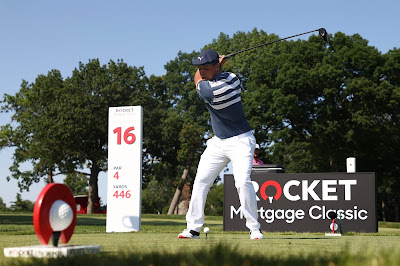 
(COVINGTON, Ga.) — The Rocket Mortgage logo’s red glare and Bryson DeChambeau’s Bombs with his Bridgestone TOUR B X bursting in air characterized the scene at Detroit Golf Club as the PGA TOUR’s long driving phenom continued his prodigious displays of power, driving to victory in the Motor City over July 4th weekend. For the tournament, DeChambeau finished 23-under par, winning by three strokes over his nearest competitor. The victory marked DeChambeau’s 6th on the PGA TOUR and 8th career professional victory.

In an incredible performance that saw him average over 350 yards per drive for four rounds, DeChambeau relied on the explosive power of the TOUR B X’s REACTIV cover to lead the field in Driving Distance, Strokes Gained Driving and Longest Drive - with a 377-yard bomb during the first round. In addition, the TOUR B X delivered all the touch and feel the golf scientist needed as well, delivering top 10 finishes in Eagles, Birdies, Strokes Gained: Tee to Green, Strokes Gained: Putting and Putts per GIR.

The Tour B X’s REACTIV cover technology, available on all four 2020 TOUR B models, is the golf world’s first SMART Urethane – using an “impact modifier” to deliver a shock absorbing soft cover on slow impact shots for more spin and control - and high resilience on high impact shots for more power and distance. The material reacts in harmony with the force of the impact. In essence, on the violent impact of a driver, REACTIV rebounds quicker than other urethane covers, generating more ball speed and longer distance. On the softer touch and feel of wedge shots, REACTIV keeps the ball on the face longer, allowing golfers to impart more spin and have better control in the short game.

“The golf world has absolutely been blown away by Bryson’s distance increases since the TOUR has returned from its COVID-19 hiatus last month,” said Elliot Mellow, Golf Ball Marketing Manager for Bridgestone Golf. “While his physical fitness and diet have captured most of the attention, Bryson also has credited his gains, in part, to the ground-breaking REACTIV cover of his TOUR B X golf ball, through which he has consistently generated over 200 mph ball speed. He has been knocking on the door each week out of the gates, so it was only a matter of time until he put it all together for a win.  We are excited to see what the remainder of 2020 holds for him.”

The Bridgestone TOUR B X is available at retail currently featuring a street price of $44.99 per dozen.

For more information on the TOUR B X and the entire family of award-winning 2020 TOUR B balls, visit www.bridgestonegolf.com.
Posted by Blogger at 12:00 PM