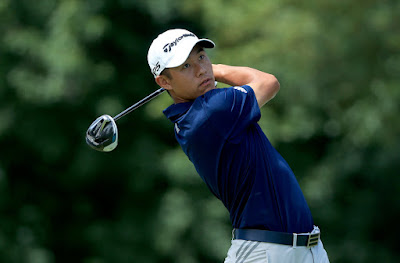 
(Carlsbad, Calif.) — A little over twelve months ago, Collin Morikawa turned professional and joined Team TaylorMade. Now, not even 24 years old, he has two PGA TOUR titles to his name. Morikawa, 23, shot rounds of 65-66-72-66 to win in a playoff after the 3rd extra hole to move to world no.13.

Morikawa relied on his stellar iron play as well as his SIM Max Rescue 19° this week to reduce the par 5 5th hole to a eagle-birdie-birdie-eagle across all 4 rounds. Collin has two SIM Max Rescues that he interchanges depending on the course and approach shots he faces. He has a 19° that goes high, landing softly at 245 yards and another 19° that has a flatter trajectory landing at 245 yards with roll.

NEED TO KNOW
- This is Morikawa's second PGA TOUR victory since turning professional in June 2019
- Morikawa joins Tiger Woods as the only other player to have won two PGA TOUR titles before missing two cuts
- Collin added a SIM Max Rescue 19° to the bag which he used to devastating affect on the par 5s this week
- In the final round, Collin ranked #1 in SG: Approach the Green with +5.873 strokes gained vs. the field
- For all 4 rounds: SG: Tee to Green +13.530, SG: Approach the Green +9.752
- Morikawa jumps to world 13 in the OWGR rankings with his victory today

Thanks for the awesome post.
solutions for HP Laptop Speaker Crackling